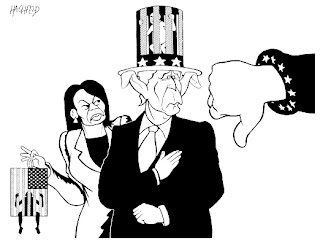 The only way to win a war
is to be as nasty as the enemy
--The Guns of Navarone (1961)
______________
Something doesn't ring true in reports about the recent jailbreak executed by Taliban in Afghanistan.

Reports indicate a suicide bomber breached the back prison wall. Considering bombs were reported as exploding from within the prison and without, this bit smacks of sensationalism to Ranger. Suicide bombers provide just the kind of crazy image that keeps this Phony War on Terror (PWOT ©) stoked.

However, if true, this is an ominous sign that anti-coalition forces have a surfeit of potential suicide bombers. This is one intelligence indicator that should be considered by the forces of good in their epic struggle in the Long War against evil. Take home: there's a whole lotta evil going on.

The press reports also failed to emphasize that Afghanistan has its citizens in substandard, inhumane mud-hut prisons. This doesn't seem to affect many people's ironclad contention that "Afghanistan is the good and necessary war." Ranger does not accept this "good and necessary" hogwash.

It seems our country is afflicted with the same black-and-white thinking that clouds George W. Bush's vision; if Iraq is bad/difficult, then Afghanistan is good. In this manichaean world view, Afghanistan had the "better" justification of the two conflicts, so weighed against "miserable," it is slid to the left on the spectrum of actions and therefore becomes "good."

But how can the U.S. support any regime that imprisons its citizens without the benefit of recourse to a legal system? (. . .Uh, oh.) Afghanistan puts people in prison without charge or trial. Many of those incarcerated in the Sarposa prison had been held for over two years without being charged.

The basis of the PWOT © is COIN, which is supposedly aimed at winning hearts and minds. Putting people in prison without trial is simply grabbing them by the balls and hoping their hearts and minds will follow.

Ranger reads anti-Taliban commentary in the European press justifying NATO's involvement in the PWOT, presumably built upon anti-immigration sentiment. The arguments revolve around the assertion that the Taliban is basically evil, nasty and dirty, by Western standards. But, so what?

If this is a problem that concerns civilized nations then those concerned should handle the scenario through the auspices of the United Nations. NATO and the U.S. have no historical, legal or moral mandate to selectively and electively invade countries to impose external standards of conduct.

NATO was formed as a defensive alliance to protect its member states from invasion, but it has recently morphed into an invading entity. NATO has become what it was founded to oppose, and the U.S. proves a poor example in this arena.

This coercion is illegal and fits the definition of a war of aggression. It is still aggression, even if you wrap it in swaddling clothes.

posted by rangeragainstwar at 6:00 PM

"Ranger does not accept this "good and necessary" hogwash."

Well I'm damn glad I'm not the only one! The day the bombing of Afghanistan began was the day I said they weren't interested in stopping terrorism. Because that was entirely the WRONG way to go about it.

Terrible, i've been saying this since day 1 and it was not popular. Now more people are coming aboard, some even are in Congress.
Personally it's hard for me to make such statements b/c i know the knee jerk reactions that always follow.And i know you understand this also since you agree-not a popular stance.The boys at socnet and soforp call me a turncoat;so much for frreedom of speech.
One can only mourn the loss of life as a result of these phoney wars.This is not happy terrain and i hate that i have to occupy it. jim

To be honest I finally did stop trying to convince people the invasion of Afghanistan was bogus as far as "war on terror" went during the lead up to the Iraq debacle because so many people I knew where acting is if I might be al-Qeada or something. Nevermind that they'd never served in the military and I'd been in ADM for the first 2 years of the 3 I did serve. Nevermind that they'd been getting their "news" from very limited sources while I'd been searching the internet and digging up as much truthful info as I could. There are still a few "friends" that won't trust me as far as patriotism goes and the feeling is mutual. But the past year or so I've felt more comfortable saying what I really feel even though there are still many who don't see what should be common sense in the stupidity of invading Afghanistan to "get bin Laden". Did you see the news story that bush is back on the "I'm going to get bin Laden" bandwagon. Trying to save his "legacy" apparently. I'm just glad there are blogs like yours where a veteran can speak truth without being told he's not supporting the troops. As far as I'm concerned the use of the US military in the way it's been used in Afghanistan and Iraq is down right an illegal use of the military. Add to that that usage was based on falsified evidence and what we have is a serious problem in this country.

Thank you for your levelheaded views, and for voicing them in the world.

Oh, and Ranger's been knocked by all the right wing-nuts, believe me. They are rabid in their defense of the venal powers that be. We'll probably write a piece about THAT soon, too.

Lisa, a post on wing-nuts blind obedience and their attacking those who thought getting the facts straight before acting would be great.

Oh by the way - although I never was a Ranger I did get to go through a 2 week PCT course they ran in Southern Germany in '81. May have been about the funnest 2 weeks of my enlistment. Hehehe I'll always remember the instructor telling me to stop my knees from shaking because I was going to bring the cliff down when we did an Australian reppel.... but then again that week of administrative leave in Munchen and another week of administrative leave in Chiemsee rank right up there too. Hitting the Hofbrauhaus and learning to ski in the Alps was great. :-)

Terrible, i always thought that the short course for Ranger was to jump off a footlocker and to eat a worm:)there i used the emoticon just for you.
I always used my admin lv time reading FM's:) jim