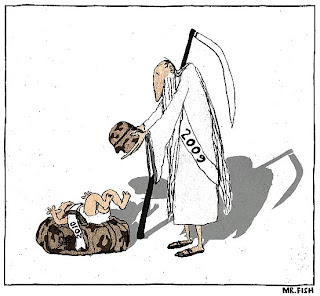 Ranger Question of the Day:
Where does Obama's Peace Prize money go?
Shouldn't this money be the property
of the U.S. Government?
________________
My thoughts roam to the dead and mangled bodies that we euphemistically call our "Fallen Warriors".

We now have a Nobel Peace Prize for War president who crisply salutes returning flag-draped coffins, visits Arlington Cemetery to channel leadership, and rubs shoulders with wounded warriors in the Bethesda area. All well and good for a Commander-in-Chief who lacks the slightest idea what the word "soldier" actually means.

Here is an idea for both Obama and all the flag-waving junkies in the Homeland: Do not photograph the returning Coffins with Metal Handles (old term for the Congressional Medal of Honor). Rather, open them, and have a viewing of the once-vital bodies now torn asunder by our devotion to the illusion of democracy.

More appropriate for this viewing would be the pose Obama struck with Japanese Emperor Akihito last month -- a low bow and hung head, to indicate his subservience to a war machine which he feels, by his pledging allegiance to it, will imbue him with a currently absent gravitas.

posted by rangeragainstwar at 1:02 PM

While we're piling on, I'd like to throw in my own kicks and cuffs. Why in the hell is Obama vacationing in Hawaii after ramping up the war? For a C-in-C to be relaxing in splendor while telling Americans to fight and die in some third world toilet is way beyond outrageous.

Lieberman wants to vacation in Yemen of all places.

Not exactly the comportment of a somber wartime president.

hell, let the guy vacation where he wants to go.

just because i intend to spend a little time in malibu (not my place, a friend's, he's letting me use it free, i'm doing alright, but i ain't nowhere near malibu heeled) doesn't mean that i don't love the rez, or where i live. it's just that malibu is a bitchin' place.

i am totally against civilian leaders saluting. it's against protocol and looks stupid. eisenhower, grant, truman, kennedy, and a host of other presidents who had served in the military didn't return salutes. it's a sign of deference and reaffirms civilian control of the military.

it was reagan, who in his wildest dreams only pretended at service, that dug him some saluting.

if you'll look when the president passes by the saluting jarheads, they don't acknowledge his little hand flippy thing. (although i must say obama's salute is much closer to regulation that that fuckwad poseur bush's) they hold their salutes, and posture of attention, until he passes. his salute means fuck all to them.

i loves me some jarheads.

one thing, i believe i wrote this to you on a personal message lisa, is that those of us who do the fighting are always, in our downtime, searching for some kind of meaning to attach to our efforts and sufferings. something to show that somewhere, somehow, what we did makes good sense.

i have a friend who is returning this week after being among the afghans for over a year. i know he's searching for meaning. he's had to bury too many young kids to let this go without some serious soul searching.

our leaders should do the same. "holy" joe lieberman who never met a war he didn't like, that chinless fuckstain mcConnell, all those assholes who send our friends and our kids into the meatgrinders while at the same time making their cronies rich, and making sure that their kids are spared service

(john mcCain, joe biden, and jim webb are excepted, webb's son is a front line grunt marine with multiple tours as an EM)

Yes, we spoke of your returning friend. Humans always search for meaning. Viktor Frankl spoke of it, and the Sunday Times Book Review addressed our biological wiring for it this week:

But sometimes ya just gotta say, "Maybe there was no meaning here." Not everything means something, right? Unfortunately, the meaninglessness of an endeavor is not directly related to its magnitude or significance, IMHO.

Dave,
I'm actually amazes that POTUS didn't go OCONUS to visit the troops- reckon they aren't as important as are the Chicago Olympic bidness.
jim