RANGER AGAINST WAR: The Fog of Peace <

The Fog of Peace 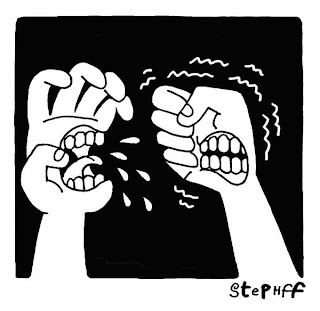 --Emotional Dialog, Peray (Thailand)
I can't go on like this
That's what you think
--The Unnamable, Samuel Beckett

The sun'll come out
Tomorrow
Bet your bottom dollar
That tomorrow
There'll be sun!
--Tomorrow, Annie
_______________
The concepts of War and Peace are usually considered distinct events, but when utilized by the state, they are actually the same, separated by a small increment.

A state will apply violence and kill members of another state or group, or even its own subjects, to achieve its goal. The goal may be reining in control, fomenting discontent or a number of other puposes. Peace and violence exist on a continuum circumscribed by and exploited by the state.

These events are designated as serving the National Interests. Something as irreversible as state violence should be commenced only upon cold, hard facts, but this is seldom the case. We can build technological marvels like Cruise Missiles, but the use of these death-dealing devices is based in emotional, subjective assumptions dressed up as the National Interest.

What we term "knowledge" is often just rational-sounding assumptions posing as facts. There are so many assumptions we live by. We presume there will always be a tomorrow, when we know that there will in fact be an end. Contra-factual presumptions like these are necessary to going on every day.

For the Christians, God may simply choose to flood the world again, like a big toilet bowl (since that's how we are treating it.) If he did it once, why not again? At some point, the sun will quit shining. All of what we believe may be true or partially true. Though it may be factually true, that not necessarily a basis for reality. The world is contingent.

Truth and policy must be consistent, predictable and rational. This is when our perceptions cross reality and National Interest emerges. But this still does not imply correctness. Our precarious fiscal bailout policy is as fanciful as our phony wars, yet both pose as the best decisions available. However, they are both based upon faulty assumptions. Our lives hang from assumptions we think are facts.

The Phony War on Terror (PWOT ©) cannot make the attacks of 9-11-01 un-happen, just as it cannot prevent future attacks. Opposing cultures meet over rifle sights because it has always been tit-for-tat, but not because it is the most expedient means of conflict resolution.

The first thing taught to young soldiers is, do NOT assume anything, yet the rest of their careers are based upon assumptions made by their leaders. Soldiers die for assumptions that are seldom true, and civilians suffer the consequences of ill-considered National Policies. Military strength is no guarantor of security, as it just forges counter-alliances.

Nothing says National Interest equals the public good, and the bedrock of our thinking is often quicksand, when fully explored.

posted by rangeragainstwar at 7:45 PM

something in me died at peleliu, possibly i lost faith that politicians in high places who do not have to endure war’s savagery will ever stop blundering and sending others to endure it.

eugene sledge "with the old breed"

him and me both, our places where little bits of our soul expired were different, the result was same.

"the pacific" begins sunday on HBO. according to the reviews it is very well done, and draws heavily on the writing of sledge and manchester (notably, goodbye darkness)

It is terribly sad when idealism and trust and little bits of soul die. Most of us start out so hopeful.

Thank you for mentioning The Pacific -- it should be quite good. I don't get HBO, so I'll wait for the CD's.

MB,
I'd love to see the Pacific series , but i don't get cable.
I'll have to wait and see it at a motel somewhere down the line.
A close relative was killed on Saipan.He was a Marine.
I plan to read Sledge's book as soon as poss.
jim

My old man was a Marine in the Pacific (WIA on Okinawa). He never talked about his combat experiences; just the screw ups aboard ship and that sort of thing. Definitely had him some PTSD (he's 88 now and in a nursing home and barely remebers any of it now).

Even when I was kid (born in '64) he still reacted to backfiring cars and in particular to the water heating system in our house when it got air in the system. It would make this rapid pop pop pop sound (that I later came to recognize as approximating the sound of machine gun fire from a couple hndred meters out) and my Dad would get all bent out of shape. Went to Florida once on vacation and it took him a couple days and a couple drinks before he could bring himself to settle down on the palm tree lined beach.

So I read Sledge to gain a better understanding of what he had been through. War is hell and the Pacific theater sounds as if it was the lowest circle of hell.

I'm going to watch the series as well, if for no other reason, than to honor the supreme valor and accomplishments of my father and Marines like him.

Soldiers die for assumptions that are seldom true, and civilians suffer the consequences of ill-considered National Policies. Military strength is no guarantor of security, as it just forges counter-alliances.

Nothing says National Interest equals the public good, and the bedrock of our thinking is often quicksand, when fully explored.


Superbly said! Once, there might have been leaders (perhaps tested by fire in their own youth) who could appreciate the wisdom of those few words above. And act accordingly.

Maybe such time will return again. But not, I fear, before we expatiate our collective stupidity in ugly and painful ways.

ps - you might be able to buy the DVD before Xmas... and save yourself the motel trips!

The Pacific also has input from, and characterizes one Robert Leckie "the book, Helmet for my Pillow."

That way, you get 1st Mar div coverage from Guadalcanal to Peleliu (Leckie), and Peleliu to Okinawa (Sledge). Ole' mike might be able to add something of value here, on account of he's way more of a historian than am I.

avedis,
So now we know why you were a Marine.
I'm the 1st man in my family to be in the Army since we came over in 1917. Ironically my grandparents left Europe to get away from war.
My Dad's generation saw it's share of warfare and in my short life of 64 years my country has been in armed conflict 1/3rd of that time.
The 3rd generation of my line has not seen fit to serve so it seems that the chain is broken. One of my cousins son's served in IRQ with the 82nd, if that counts as family service.
I would've been a Marine except they had a crummy PLC program that lent little financial support to members of the program.Army ROTC was a much better program so hence her i am.
I'm convinced that IF i had joined the USMC then i wouldn't have lived to be a old man.
The Army was enuf for me.
The old ww2 war staries are indeed humbling to hear. These guys fought on a much more elemental level than we now experience. In the Infantry we used to say NO SLACK DUE-and that's how that war was fought-on both sides.
jim

Yep,felt like it was necessary rite of passage.
My son considered Marines for the same reason, but then made the good choice of Army (via ROTC) due to, as you mentioned, the far richer benefits. And that's just fine with me. He owes himself the same as what I want for him, a long happy life.

My dad really had some disparaging salty things to say about the Army which I later found out were BS, but when I was I kid I just sort of absorbed it all as reality. If I had gone Army he would have considered me a second rate slacker.

avedis,
Better a 2nd rate slacker than a Marine.
jim

I am done with watching War TV and Movies for the most part or anything Hyper-Violent...I first read "With the Old Breed" by Sledge and "The Forgotten Soldier." By Guy Sager 30 years ago and I can say they shaped my opinion greatly about the so called Nobility of War. I am sick of it and have been for along time. Knowing Eugene Sledge he would be disgusted that his memoirs (which he wrote to tell his family what he'd been through) Were being used to Wrap Spielberg Hanks and Company in the Flag...Sledge never ever saw a violent War Movie or TV show.He HATED VIOLENCE and KILLING...
Are they going to show dead marines with their penises cut off and stuffed in their mouths? Sledge sliding down a slippery slope in Okinawa only to throw up at the bottom because of all the maggots and rotting body parts... The real hell of Peleliu? No Cover in the coral rock 110 degrees in the shade Blood and Guts and Excrement all over the place? Nope...They'll be a few scenes to gross out the viewers but it will be just another HOOAH Show about how hard the Marines had it. They did have it hard...
My Friend Dave passed away this week...He did not write a memoir about WWII but he fought in the Bulge and suffered horribly...He used to tell me there's a reason he and his buddies did not say much...
I never asked him to explain why. I just hugged him and helped him the best I could in the last years of his life..."Only God might understand why he put me through this life and I am damn sure gonna ask him!" Dave used to say. Well now Dave and millions of others now have that chance.

Ranger Hazen,
You've jumped the gun.
I've done an essay on the recent PWOT movies.
It's in the feed tray, we edited it yesterday and Lisa will work her magic on it.
The basic disconnect with war movies is exactly that it turns the whole business into entertainment,which is exactly what it isn't.
Sorry about your friend.
I had a casual acquaintance here in Quincy Fl that was in the 75th In Regt and he fought in the Bulge. He was skinny,small and as flaming gay as a man could be,but he had a Silver Star from the Bulge. Also a CIB.
Most folks accepted him and respected him.
He's a good exam. for the folly of DADT.
jim

I reject depictions of hyperviolence, as well. I feel it cannot help but have a detrimental effect upon the mind and body.

I am sorry to hear of your Dave's passing. You were a good friend to him.

The trouble with these shows is that they avoid the depictions of hyperviolence which would take all the romance out of them. They make it all seem too noble and worthy.

I grew up watching the news from Vietnam, which occasional did show some terrible violence, but was overwhelmed by the romantic war movies and TV shows of the post-WWII military worshiping type... it now seems incredible to me that my cousin killing himself after getting back from Vietnam didn't deter me in the slightest from joining the army. I guess it just wasn't discussed with any candor.