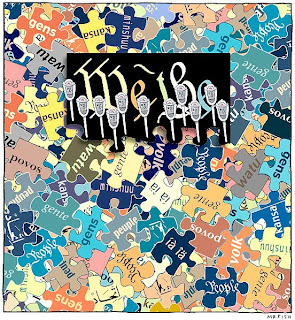 No visible means of support and

You have not seen nothing yet
Everything's stuck together
--Burning Down the House, Talking Heads

"Security experts had considered the case of Zazi, a former coffee vendor from New York who had moved to Colorado [where he worked as as shuttle driver at the Denver airport], among the most serious within U.S. borders since the attacks of September 11, 2001. In recent weeks, however, the case has been overshadowed by the attempted Christmas Day bombing of a Detroit-bound airliner (Zazi Associate Charged in New york Bomb Plot.)"

We can see how the exploits of would-be panty bomber Umar Farouk Abdulmutallab would shove the other would-be bomber off the front page (look what happened when Britney went commando; we are as a nation, underwear fetishists.) One might think these bombers-manque are some sort of latter day Guy Fawkes.

Zazi appears to be an al-Qaeda bomb-making trainee willing and able to carry out attacks in the U.S. He has low-level bombing capabilities and intent, if we believe news sources. That is all the bad news.

The good news is that like the shoe bomber Reid and crotch bomber Abdulmutallab, Zazi was an ineffectual operative.

"In 2009, Zazi bought beauty supplies, including acetone, in order to manufacture approximately two pounds of an unstable, but powerful explosive—triacetone triperoxide, or TATP. This substance is often used as a detonator to set off even more powerful explosives." He allegedly "cook[ed] up the homemade bomb materials in a Colorado hotel room, [then] embarked on a cross-country drive to New York" (LegalInfo).

Zazi allegedly manufactured and transportedthe TATP with the intent of bombing something in NYC. The target has never been disclosed, nor has the actual amount of TATP in Zazi's possession. There has been no evidence presented that the homemade explosive was in fact an explosive mixture, but presuming that it would have exploded, how would it have been detonated?

In the July 2005 London transportation bombings, a TATP mixture was successfully detonated, causing "small explosions". In four separate incidents, 52 people were killed, in addition to the four suicide bombers. In the U.S., the Shoe Bomber and Underwear Bomber were unable to detonate their small explosive devices.

If Zazi possessed about two pounds of TATP, what could be a high-value target for such a small amount of explosive? Two pounds of homemade explosive is not adequate to blow up a house or any structure of significance. It could blow up a car, but it could not make a car bomb. In comparison, a Claymore mine has 642 grams (~1.3 pounds) of high-order, factory manufactured C-4.

Ranger thinks back to when toting explosives in a rucksack was de rigueur, and two pounds of explosives wouldn't take down an oak tree. Two pounds of homemade explosive would likely not be more than a statement, and the statement would be, "We al-Qaeda trained bomb makers are pathetically incompetent."

The grenade that was commonly used in Vietnam was the M26 Frag grenade, which had 164 grams of Composition B. The M362 A1 High Explosive 81 mm mortar round has 2.10 pounds of Comp B, a good approximation of the 2 pounds of TATP Zazi was planning to employ (assuming it was pure). More likely, the explosive power in the homemade TATP is rather low-order far as bomb-making materials go. In the military, one places explosives to enhance the blast effect, and even if Zazi were so-trained, we are not talking a major destructive force.

We are spending billions to counter buffoons. Our three major stateside threats -- Reid, Zazi and Abdulmutallab -- all possessed less than two pounds of homemade explosive materials, creating a device that would be not much more than an irritant. Contrast that with the hundreds of tons of explosives dropped on Afghan targets.

Zazi is being charged with "conspiracy to use weapons of mass destruction." Since when has less than two pounds of explosive become a WMD? A bomb isn't a WMD, it is just a nasty bomb. The concept of bomb invovles fear because we think of our own powerful bombs.

Zazis' desire and intent may have been to use a WMD, but the reality is quite the opposite, just as Saddam promised to bring the "Mother of all Wars," but was not quite up to the task. We humans are often burdened by delusions of grandeur, or just bog simple delusions.

In a nice twist, even the Wall Street Journal has begun to recognize contradictions in our approach (when it suits their editorial position):

"In the latest case, Zazi reportedly cooperated only after the feds charged his father with conspiracy and threatened his mother with deportation. That came well after his arrest. It's also amusing that critics who decry as "torture" such interrogation techniques as isolation or exposure to heat and cold don't seem to mind threats to possibly innocent family members (Mr. Holder's Triumph)."

posted by rangeragainstwar at 4:45 PM

We are spending billions to counter buffoons

And those in Versailles-on-Potomac roll right along figuring that, like their buddy MOTUs on Wall Street, the citizen will never call them on their BS and withdraw their support.

people like the cheneys, the g7 elite and their supporters believe that we will be nuked "one day". they believe this because they don't trust anyone except their kinda people, which are people and governments that do as they are told. they also believe this cuz they know what they have done and know that some of these "lunatics" aren't the type to try and "forget about it" and just start boozing it up like the rest of us.

they have decided that by maintaining a military presence in and around these problem areas, and by secretly helping undermine unfriendly governments, thus keeping things thoroughly destabilized as to neutralize technological advancement, that eventually the hoi polloi will get worn down, forget about all the nasty tricks of the past, and fall in love with OUR "VALUES" and overthrow said guvments while singing god bless america and praying for a mcdonalds/starbucks instead that outdated "justice" thing.

shit doesn't have to even be close to working for it to throw those pants wetters into a tizzy.

they didn't have a work of art explosive set, simply on account of it wasn't necessary.

shoe bomber? epic failure which had little or no chance of ever succeeding. even if he had been wearing the shoes at detonation (if that ever happened), the most he could have expected was maybe the loss of part of one toe. damage to the plane? minimal and most cosmetic.

jose padilla: didn't have shit, probably couldn't have made shit if he got any. but the lad had him some "dreams of jihad."

thousands and thousands of man hours spent trying to figure out exactly what the fuck his crime was. precedants established for arrest and detention of american citizens without any semblance of due process, oh, and we will also torture you until your limited brain is nothing but mush.

it's as if we have turned our law enforcement, intelligence services, and policy (foriegn and domestic) over to a bunch of bathrobe and shower shoe wearing dudes in a fucking cave somewhere and said

"okie dokie smokey. you're the big kahuna in charge of this shit."