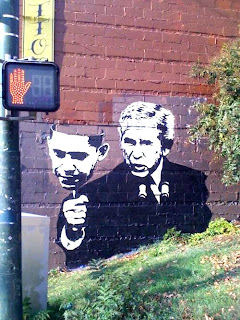 --George Wallace
Then with the boiler about to explode
from eight years of blather and neglect,
Humphrey's cold-war liberals could have fled
down the ratlines and left the disaster
to whoever inherited it
--The Great Shark Hunt,Hunter ThompsonToo real is this feeling of make believe Too real when I feel what my heart can't conceal--The Great Pretender, The Platters


--The Lottery
, Shirley Jackson
___________________
On this not politically-correct Wednesday, Ranger extends his assertion that Obama is George W. Bush in black face to his white bread sidekick, Hillary Rodham Clinton, but in obverse: Ms. Clinton is Condoleeza Rice in white face. As she is the most likely person to replace Joe Biden for term two of Obama's administration, it is a worthy consideration.

Much as Obama emulates the white king, so Clinton channels the black Queen of Mean. Yup, Ranger really said that. What did we get in the 2008 election that met the bar for HOPE or even CHANGE?

is in fact more hawkish than was her predecessor in America's leading Equal Opportunity slot. Being a dove her entire life, she must fight harder to play a hawk, which is hard to do when she cannot rock the Neo Matrix coat and boots of the ironically-named Ms. Rice (remember the Kennedy-Lincoln naming coincidences?)

How can we pretend that we have a two-party system when there is not an RCH's difference between the contenders? More precisely, there isn't much difference after they assume the Office; moving in changes everything. Why have elections -- why not just lotteries?
Yesterday, the Rolling Stone's Matt Taibbi gave a chart showing big machers like Goldman Sachs, Citigroup and JPMorgan et. al contributed to George Bush's campaign as well as Barack Obama's, as well as Romney's . . .

It looks like we have choices, but they are all front men for their handlers. Color and shape may differ, but your mileage won't vary; they are all the same under the hood. How can one feel anything but discouraged when an ostensibly liberal Democratic administration has a Secretary of State to the right of a Republican right-wing conservative Christian sabre rattler?

What do you think -- are there simply no options in this plutonomy, or do the people get what they want (and hence, deserve)? Is there better out there?

Or are we destined to live in the Twilight Zone and call it a day?

posted by rangeragainstwar at 6:39 AM

It's kind of like putting a Yugo engine in a 2012 Corvette!

Looks good on the outside...

I know I've harped on it before, but there IS one candidate for President that IS different.

I prefer this fellow

Ranger and Lisa, it seems everywhere one looks one sees really bad government, and some that is purely evil.

In the case of the Great Disappointment in the WH now, I wouldn't agree that he's Dubya in blackface, nor is Hillary worse than Condoleeza.

But they're close, due to the policies they pursue now.

I'm sticking with local and looking for some 3rd candidate to write in or vote for.

You missed the second "h" and he'll gitcha for that. :)

That about sums it up nicely.

That sums it up nicely, thanks.

I hear the 2nd Ms. Newt will spill the beans on Frontline tonight. I wonder who's paying her meal ticket for the show?

Ahh.. so *that's* why my write in for the Virginia primary didn't get counted... spelled it wrong.