RANGER AGAINST WAR: A Soldier's Heart < 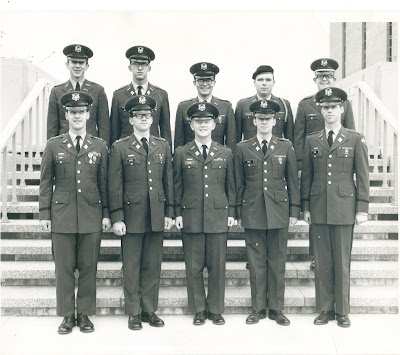 We don't receive wisdom;
we must discover it for ourselves
after a journey that no one can take for us
or spare us
--Marcel Proust

April is the cruelest month,breeding Lilacs out of the dead land mixingMemory and desire, stirring Dull roots with spring rain
--The Wasteland, T. S. Eliot

This entry is in remembrance of Douglas Craiglow Mabee, Killed in Action (KIA) 10 Apr 1970, two days before Ranger entered country.

Both Mabee and Ranger were ROTC cadets at Bowling Green State University (BGSU), Ohio, from 1964-68. During that period the cadets that we knew served from 1965 to 1972 in the Vietnam War -- a critical time for a soldier to be in the Republic of Vietnam.

I do not know Mabee's reasons for serving, but he did so, and in a period when many men were willing to sidestep the issue. My memory of Mabee is that he was quiet, focused and understated. He was an average cadet commissioned in the summer of '68.

Mabee was branch assigned to Armor, a classic combat arms assignment. He was an officer of the 17th Cavalry, F Troop, 196th Infantry Brigade assigned in III Corps near Plantation, which was only 20 miles from what was soon to be my duty assignment. He was 23 years old when KIA.

If Mabee had survived it is possible we would have bumped into one another at a PX or local bar. It was not to happen, however, as I arrived in country two days after Mabee was killed. His picture surfaced among my Army items in my mother's possession which I collected after her death.

There is scant internet presence for Mabee -- one friend, Bill Weis, remembers a man of peace:


I spent my evenings drinking and chatting with Doug during our days at Bowling Green -- listening to progressive jazz. Doug always hosted our late night happy hours at his apartment. A generous, gentle, peace-loving man -- who needed the help of ROTC to finance his education. He would never have fought another person.


In fact, Douglas Mabee was killed by a planted roadside device -- what we would call an improvised explosive device (IED) today. An unidentified commenter @ the VirtualWall.org wrote on 25 Nov 2005,

Lt Mabee was a very likable person, I wish I could have gotten to know him better. What I remember of him on his last day was he was very full of energy and had a strong will about him. He and I were face to face looking at each other, the last thing we saw before Charlie set off the road-side mine. I survived that day, with guilt all these years. I think of him and that day a lot.

It is a comment oft-made of many others. Since there are no pictures of Mabee in the ROTC Department at BGSU or on the internet Vietnam Veterans Memorial Wall sites, it seemed incumbent upon me to publish his photo from 44 years ago -- a lifetime and a day. Some sundry statistics to put Lt. Mabee's death in a century filled with soldier's deaths into perspective:


Ranger has expressed ambivalence over the Vietnam War Memorial: There is no doubt that it elicits a powerful response, and the names are overwhelming both in their number and the implication of their equality. But of course, each was a singular death of not only the person but the potentiality which his life would have represented in the world. That loss cannot be rendered as it is unknown.

So Ranger writes that Mabee was an average cadet, but what was or what might have been the entirety of Mabee? His death was, as for most, by luck of the draw (in an unfortunate usage of the term), and not on the basis of any particular shortcoming or need. The "maybes" of Mabee's life will remain forever impossibilities. I remember Mabee as a good man, and so his memory should remain.

Presented for your examination the photo of 1/LT Mabee (then Cadet) on a day when we all still had something to smile about.

posted by rangeragainstwar at 1:22 PM

Thank you, Bill, for your eloquent remembrance your most above-average friend. You had the privilege of entree into his deeper being; Jim knew him only as a classmate. I am greatly sorry you lost a dear friend.

Bill Weis,
I wrote this entry as a obligation to a fellow class mate. My comments are all made with soldierly respect.
A respect that i will always express in Mabee's memory.
We were all average Americans who stepped up to the plate at a time when we we often scorned on campus.
I like Mabee needed the ROTC funds to keep me in school.
jim