RANGER AGAINST WAR: Stifle Yourself < 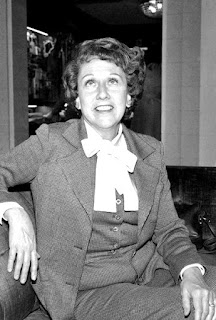 --Do you know that sixty percent of all deaths
in America are caused by guns?
--Would it make you feel any better, little girl,
if they was pushed out of windows
--Archie

We'd like to take a moment to recognize the passing of a fine actress, Jean Stapleton. Her character Edith Bunker on the 1970's series All in the Family was emblematic of the slow progress of women against an oppressive male hierarchy, but in a way which did not bludgeon that apparent oppressor, for her husband Archie was just a notch up and always in danger of being trampled. It was a compassionate portrayal on the part of all the principles.

All in the Family captured the zeitgeist of the time, and was one of the first t.v. programs to deal with the Vietnam War in the person of Archie's son-in-law, Michael Stivic (The Meathead). The series showed the passing of generations, from a time when all men did military service to a generation which "had other priorities" (to quote Dick Cheney), many of those being self-serving ones. The program covered the lives of simple blue collar workers as they clashed with the various empowerments which modernity ushered in. Archie was a relic being left behind while his black neighbor, George Jefferson, "moved on up".

Current t.v. is so vapid that many programs conclude with a token voice-over in which a spoken bit of pablum is regurgitated for the viewer so he is not aware that his past hour was wasted. While not every episode was a gem, All in the Family played more like a half-hour of theater than glitz, and had more verisimilitude than most programming today.

Edith's most poignant moments came when she dared to challenge Archie's dictate to "stifle". Perhaps her most moving performance came when she defended the worthiness of her volunteer work at the Sunshine Home for the aged; if the "cling peaches" episode was the nadir of Edith's subjugation, Sunshine Home was the zenith of her triumph. She was not only protecting the dignity of the infirmed, but that of her own person.

Archie: Let me ask you something there "Florence Nightinggown"! How much are they payin' you for all this "Sunshine"?
Edith: Nothin'.
Archie: Oh, nothin'! And that's exactly what's it worth, nothin'. Because if it was worth somethin', they'd pay you somethin'. Now case closed, Edith!


She instinctively understands Archie's fragility evidenced in his need to degrade others, but she also recognizes when it gets to the nitty gritty, and she must define herself lest she be obliterated. At those times, Archie's ego must take a hit in the service of maintaining the structure of his life. It is risky, and among the most poignant pieces of television acting I have seen.

In a notable devolution in t.v. today, the man of the family is degraded and delegated the minimized role of the buffoon or worse (Family Guy, Rules of Engagement, etc.) Although Archie (like his spouse, Edith) is limited in many ways, he is the product of his time and environment.

Though the viewer may laugh at him, in his milieu, he is respected. Michael Stivic represents the new guard challenging his racist thinking, but still Archie remains man of the house (carrying on the tradition of Ralph Kramden's "King of his castle" concept.) His humanity is inviolable and is a necessary component of viewing Archie as a character capable of some growth.  Today's programs aim  low, at character assassination, and this simple-mindedness betrays the actuality of how evolution might occur.

** I had posted You Tubes of two classics -- Edith's compassion towards her gay deceased relative, and her reaction to Archie's affair; sadly they have been removed due to copyright infringement.  Hopefully, someone will re-post them in the future.

As she says when reconciling with her husband, "I used to think you was the only thing I could count on, but that ain't true -- there's something else I can count on. Me."