RANGER AGAINST WAR: Ayahuasca, So You Don't Have To <

Ayahuasca, So You Don't Have To 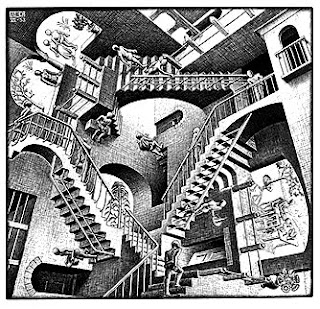 M.C. Escher
For thogh we slepe or wake, or rome, or ryde,
Ay fleeth the tyme; it nil no [will no] man abyde
--Chaucer, The Clerk's Tale

What I am looking for is not out there,
it is in me
--Helen Keller

Contented with little,
yet wishing for more
--Charles Lamb

The truth won't set you free; it is what it is. But recognizing it, will.
It was reported this morning that some people died at a group therapy session in Berlin after ingesting unknown substances (Two People Die in Poisoning at German Therapy Group.) Which brings me to a provide both a PSA and our Sunday homily: Know what you know.

First, you should know Lisa is not a druggie. But she's not a Carrie Nation, either. Her mother participated in one of the early psychotherapeutic studies involving LSD with Dr. Wolf in the early 1960's, so when two friends within the span of a month suggested she might try the hallucinogen Ayahuasca, it was compelling. It is not a suggestion one receives every day. Other than going stark raving mad like an outcast from the set of Reefer Madness, there seemed no harm.

One friend had ordered some online from Denmark, but had no idea how to mix it; the other offered a group setting under the observation of a local therapist, which seemed preferable.

Mine is a little story of a short, perfect trip led by curandero Raul of the Peruvian jungles. I will not do it again, as it is not necessary. The denizens assure me it is always different, but there is nothing more I need from this.

The stuff itself tasted vile -- like a cross between Haley's M.O. and Elmer's white school paste, with some small bits of wood thrown in. Having never tripped before, I had no preconceptions. Nothing happened for what seemed the longest time, and I began to think I'd been had, the wood bits thrown in much like the Army chef who crushed two eggshells and added it to the powdered eggs so the recruits could feel like they were eating something fresh. But then, my cells began their decay.

Not a pretty sight, as the flakes were seen hopping off my legs, and I was treated to a quasi microscopic view of cellular decay. Crepey and greenish, it disgusted me. My best efforts at slathering on skin creams were foiled. I smiled, as the trip had begun.

Yeah -- pretty icky, and not so exalted. Nothin' to die over, fer sure.

I've tried LSD a number of times and mushrooms too but have never had what I could honestly call hallucinations. Altered perceptions, a different view of the things around me, for sure but that was pretty much it. Most of the times I would say that a journey into the workings of my inner thoughts was a large part of it. hmmmmmm.... how to say what I mean fully.... when my mind perceived the outside world somewhat differently then before I studied my perceptions and why they had been the way they were previous to the 'trip'. If that makes any sense. :-) Perhaps this inward observing of how we perceive prevented true hallucination?

I can't say I had any hardcore hallucinations, just an altered perception of "reality," as you say. That would be the benefit, IMO -- to be able to step out of the box circumscribing our own world, and see that there are other places from which one might come at an issue.

Lisa, to say "step out of the box" is a great way to put it. I doubt that he tried hallucinogens but there was a man named Jim Fixx who among many things wrote some books of mind problems/puzzles. One thing he talks about in the book I have is "sideways thinking". Same idea. He was of the opinion, correctly I think, that many problems are solved this way. It makes a lot of sense. If you're trapped through conditioning to accepting a limited number of responses/possibilities that leaves a lot of territory unexplored.

If you were to travel to Vermont and never get off the Interstate and travel some dirt roads and then say you "saw" Vermont would be a good analogy. ;-) I can't remember who said it but there is a quote something to the effect that travel is like reading a book. If you don't travel it's like never turning a page. Life is like that too.

Precisely it. What a great joy to get off the interstate and meet the people of the land. People who only go on cruises, or travel to 4-star gated resorts, never truly know a new mindset ensconced as they are with their own.

My great joy in traveling is to lose my bearings, as it were, and to learn others. Many Americans (people) never travel, and so haven't any idea how other people live the world. No wonder they are afraid and angry, only having recourse to received data.