RANGER AGAINST WAR: Bang Your Head < 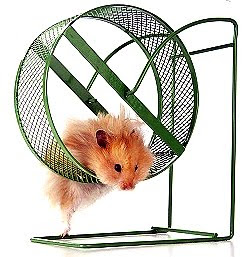 We’re lousy at recognizing when our normal
coping mechanisms aren’t working.
Our response is usually to do it five times more,
instead of thinking, maybe it’s time to try something new
--Vicious Stress Loop, Dr. Robert Sapolsky
_______________

Few would argue we have had a stressful eight years. Maybe as Dr. Sapolsky suggests, we are hardwired like hamsters running their wheels. Perseveration is the behaviorist's term for uncontrollable repetition; maybe the U.S. has turned into a nation of perseverationists.

Debate is broadening concerning the presumed imperative nature of the War in Afghanistan -- the once Good War gone bad.

President Obama will deploy 68,000 American troops there by year’s end, and calls Afghanistan"'a war of necessity' to prevent the Taliban from recreating for Al Qaeda the sanctuary that it had in the 1990s" (Crux of Afghan Debate: Will More Troops Curb Terror?).

Clearly the Taliban are radical Islamists that provide a safe haven for the Al Qaeda operatives. Clearly the 9-11 hijackers received military training in Al Qaeda training camps in Afghanistan. What is lost in translation is: The skills learned in these camps had absolutely nothing to do with the success of the attacks carried out on 9-11.

The ability to shoot an AK-47 and throw hand grenades is moot. These operatives were sophisticated well beyond training camp standards. Their trade craft was gleaned in the West. In addition, Afghans are conspicuously missing as terrorists on the world scene. Simply: The problem is Al Qaeda, and not the Taliban.

The Times story continues, "[counterterrorism experts] point out, the CIA has killed more than a dozen top Qaeda leaders in the lawless Pakistani tribal areas, disrupting the terrorists’ ability to plot and carry out attacks against the United States and Europe." But how do we know the dead are actually Al Qaeda operatives, and not simply Taliban personnel? The two entities are not necessarily interchangeable.

"The administration’s “clear, hold, build” strategy is meant to win over Afghans. It is based on the counterinsurgency principle of protecting the population — or, in this case, at least Afghan population centers — to win confidence and support, before isolating remaining insurgents to be killed or captured. Defense Secretary Robert M. Gates and Admiral Mike Mullen, chairman of the Joint Chiefs of Staff, have maintained that the United States cannot fight terrorists from afar."

U.S. policy is to isolate then kill or capture remaining insurgents, but we have never figured out what to do with those we capture, because we are short on clarifications -- because insurgents are not necessarily terrorists (though that is what the briefcase-toting, money-sucking experts would lead us to believe.)

It is absurd to be killing Afghani insurgents because there might be a chance that their deaths might save an American life. Why are Afghani lives less valuable than American lives?

Terrorism expert Bruce Hoffman says, "the success of strikes from Predators in killing Qaeda suspects in Pakistan depended on accurate information on terrorists’ whereabouts from Pakistani intelligence. In Afghanistan, without such sources, 'we’d be flying blind'."

Basing Predator targeting on Paki intelligence is a joke -- why would U.S. officials believe anything they tell us? This is reminiscent of the old War on Drugs tactic where a little dealer is sacrificed and the DEA agents claim strategic success. If intel is not A-1 and confirmed by U.S. sources, we are fooling ourselves with phony successes in a phony war.

Speaking for many advocates of an interminable war, Hoffman continues his fantastical thinking with, "Disengagement from Afghanistan could destabilize Pakistan and 'guarantee' a future attack on the United States from the region." This is reminiscent of a Domino Theory war in which Ranger served.

The entire Phony War on Terror (PWOT ©) is based upon unverifiable beliefs and faulty assumptions regarding the nature of the threat. Al Qaeda is a threat, but not one which will be resolved via extensive military action.

Yesterday, the Wall Street Journal opined, "The simplistic case for NATO's mission in Afghanistan is that it's the country that harbored al Qaeda when the plans for 9/11 were hatched. ... But Afghanistan matters not because that's where 9/11 was conceived. It matters because that's where it was imagined (The Afghan Stakes)." Now there's a reason to attack a nation -- because someone had a thought to do something bad.

The question really is, "Who had that thought?" The answer, probably an Al Qaeda member. That requires finding the persons who had that thought, an operation better done with a fillet knife than a sledgehammer.

Unfortunately, as Andrew Bacevich said, "despite the Obama administration’s assertions that it has a new approach, 'the truth is they want to try harder to do what we’ve been doing for the last eight years.'" Perseverationsists are us.

posted by rangeragainstwar at 11:06 AM

Hi Jim,
Great post, as usual. You always say the things that should be screamed from hilltops.
Back in your Vietnam days, when you were keeping the Dominoes from falling, were you a true believer? Or were you skeptical even then?
I turned 18 about 6 months after the draft ended, sweating profusely over my future. I remember not knowing or caring in the slightest whether it was a "good" war or not. I just knew that I might be killed if I went. There lay my opposition.

Dave,
I really didn't much care about politics. Soldiering was my job , but even with that it was evident that the war was a bucket of crap.
Like the soldiers of today -we just did our jobs and hoped that the politicians were doing theirs. But that's how the war started. Oh well!!