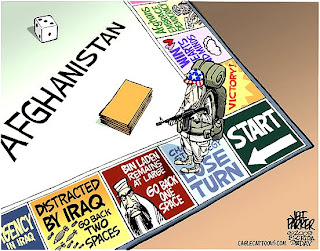 Rather than a quantification in the name of taming the beast, why not a complete reappraisal of the logic that gave birth to the Phony War on Terror (PWOT ©)? The war is based on a corruption of logic and reality-based thinking. We are sold wars based upon emotionalism versus cold facts. You are a traitor is you don't hop aboard the war train.

While it is a fact that al Qaeda -- or loosely federated groups of Islamic terrorists -- is a threat to the U.S., at what level? How many operatives act out of AFPAK? Do they have the sophistication to export their activities to CONUS? Can somebody please give us these metrics? Terrorism against AFPAK, Israel or Europe is not the responsibility of the U.S. taxpayers, lawmakers or warfighters. Any threat from al Qaeda does not justify the U.S. war in AFPAK, nor does expanding these operations increase our security.

From Foreign Policy: "President Obama said 'going forward, we will not blindly stay the course. Instead, we will set clear metrics to measure progress and hold ourselves accountable.'"

What follows is a bunch of gobbledegook.

Agreed Metrics: The supporting objectives of the Afghanistan-Pakistan strategy form the framework for evaluating progress. The indicators within each of the objectives represent a mix of quantitative and qualitative measures, intended to capture objective and subjective assessments.

It is presumptive to presume that there is any progress in the region. The only realistic metric is the loss of U.S. life and resources in theatre. When indicators are analyzed using "subjective assessments," then we are playing wishful thinking games based upon what stooge is writing the reports.

The report writers have vested interests in presenting best possible spin. They are using a "common start point" of July 17, 2009, based on a previous ODNI assessment, but a complete mission analysis should be performed concerning the necessity of these wars. Why -- not, "How?" -- should be the key question.

As a check and balance on the interagency, a separate assessment will also be produced by a Red Team, led by the National Intelligence Council [NIC].

The NIC check is simply a preaching-to-the-choir exercise. For eight years this nation has been flushing lives and money down the toilet, and our intelligence agencies are down with that.

Objective 1. Disrupt terrorist networks in Afghanistan and especially Pakistan to degrade any ability they have to plan and launch international terrorist attacks.

This objective is too broad and unquantifiable. U.S. policy cannot be so expansive, nor can we defend the world; nor should we want to. The U.S. goal should be to disrupt potential attacks against U.S. targets.

Development of an enduring, strategic partnership between the U.S. and Pakistan.

Why is this the center of U.S. foreign policy? Does the existence of al Qaeda dictate U.S. geopolitical actions? If so, we are being played like a fiddle. AFPAK is not the key issue facing the U.S., yet we pretend it is. Why?

U.S. actions will not alter the dynamics of AFPAK realities. To believe otherwise is an illusion. Our cultural realities do not dovetail.

"Demonstrable action by government against corruption, resulting in increased trust and confidence of the Pakistani public" -- If Pakistan has not achieved these metrics to date, why does the U.S. think it can change their internal dynamics?


We reckon that our New Policy doesn't much care about India, the subcontinent.
"Coordination of international efforts by the U.N." -- How will the U.S. achieve this coordination if they have not done so to date?

"Pakistani policies and resources committed to maintaining international support" -- Isn't this a Pakistani responsibility? When was the U.S. President designated coordinator of AFPAK nations?

"Objective 3a. Defeat the extremist insurgency" -- we have become extreme in our rhetoric: Aren't all insurgencies extremist?

Get this administration a copywriter, lest they become confused with the Bush debacle.

posted by rangeragainstwar at 7:58 AM

You're not the only one to question this mess.

If you can tune out the typical 4GW Newspeak, Bill Lind (http://www.d-n-i.net/dni/2009/09/22/on-war-316-last-exit-before-quagmire/) asks the same question: how would all these GIs actually help accomplish a strategic objective?

Yep and that what they were called in the 1770 just a bad of mistfits.
jo6pac

myself, i try to believe six impossible things a day.

It just takes discipline. Oh, and stepping through the looking glass. . .

Whoever mocks God, God mocks him as well.