RANGER AGAINST WAR: Ramping Up Operations < 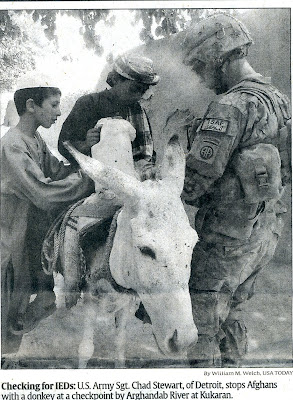 Jews wait for the Lord,
Protestants sing hymns to him,

Catholics say mass and eat him
--Love in the Ruins, Walker Percy

I know you're all a little down
because Lindsay Lohan is in jail.
But look at it this way:
Our streets are once again safe
--Late Show with David Letterman
______________
82nd Airborne Sgt. Chad Stewart, from Detroit -- one of America's Guards of Honor -- stops a boy and his burro at a checkpoint (U.S. Ramps up Afghan Operation.) Don't that just say it all?

Detroit -- once-proud Motor City -- lies in ruins, while one of its sons spends his days checking burros halfway around the world. Drones, satellite signal intelligence, blast-resistant vehicles, sophisticated communications, and it boils down to a burro at a checkpoint. If one believes the Bible, then our soldiers are not that far removed from the Roman legionnaires or King Herod's soldiers, who faced another boy on a burro.

Burro checkpoints ... it sure makes me sleep more soundly knowing that threat has been neutralized.

posted by rangeragainstwar at 2:45 PM

I know I'll sleep better at night, knowing that burro was patted down and Lindsay Lohan is safely incarcerated.

We are glad to deliver those fleeting moments of peace.

To be fair, that soldier and child are both probably better off in every way than if either of them was in Detroit.

I wonder when people will figure out that the 82nd Airborne Division is terrible at being detectives but really good at jumping out of planes and firing automatic weapons.

UC,
Does an old Ranger get to pat down Lindsey?
jim

Grant,
It's all a cosmic joke.
jim

wish I could get it.
It just don't feel funny anymore....

I'm sure they patted down Lindsay at least as good as the burro, and I'm sure there were lots of volunteers.

Deryle,
Hermann Hesse called it- the laugh of the immortals, and i'll call the pwot -the dance of the immoral.
The point of the cosmic joke is exactly that we don't get it.
We can't without sheddding our false dreams, and when we accomplish this we have become the immortals.
jim