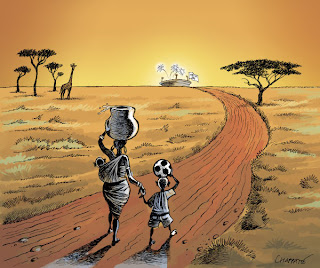 Keep Calm and
Carry On

The U.S. and its NATO allies are tied up fighting what they call Terrorism, while the rest of the world is transfixed by men kicking a little ball around a field. If terrorism were the monstrous threat it is being sold as, then why hasn't it been mentioned in the South African-sponsored games?

The reason is, terrorism is not aimed at the games, nor is it a world threat. Terrorism is a localized event. However, that doesn't stop the U.S. leadership from trying to peddle it as if it were the New Red Scare.

The fact is, terrorism is predictable and manageable with proper national planning. The terrorism the U.S. et al is fighting in Iraq and Afghanistan lacks the assets to make a spectacular showing at the World Cup -- they have neither the capability nor the intent.

The World Cup is a venue for the Little Guy to triumph over the Big One, paralleling the philosophy of the terrorist; even the referees favor the underdog at the expense of the Western nations. Therefore, the games are safe. Terrorists are not going to set off a bomb in a stadium filled with Africans and other members of the Third World. Not gonna happen, G.I.

In comparison, The Olympics can be a target as the rich Western nations usually dominate the winner's circle.

The relative freedom of the World Cup events provides an example showing that terrorism risk can be calculated, and not every venue need be a site of panic.

posted by rangeragainstwar at 7:15 AM

It's a shame we don't have leaders that could understand that simple concept. If they could grasp that and actually be serious about fighting terrorism then they'd do it in the only possible way that would be effective - fight it at it's source, exploitation by wealthy nations and corporations.

Terrible,
Terrorism has been historically the only tactic that the poor and disaffected could use against power and riches.
This is contrasted by the fact that terrorism is just but one tool of the rich /powerful/governments.
jim