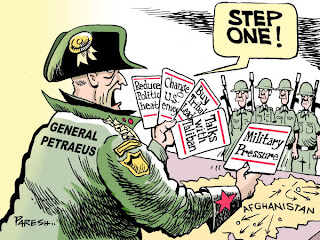 You're there in the time slip
And nothing can ever be the same
You're spaced out on sensation,
like you're under sedation
--Time Warp,
Rocky Horror Picture Show

There is an unwritten rule among competent soldiers that says, never criticize your contemporaries. This is both self-serving and prudent, as have all done something that can be seen as deficient.

So what did McChrystal's unidentified aide mean when he criticized General George Jones as being "a clown" who was "stuck in 1985" (The Runaway General)?

Presumably the criticism meant that Jones was still a proponent of Cold War methods and ideology [1985 was the year Jones entered the War College, while McChrystal took command of the 75th Ranger Regiment.] The implication is that Counterinsurgency (COIN) and Counter Terrorism have superseded the Cold War mindset.

However, the Cold War mentality is still alive and well in U.S. foreign and military policy. From Colin Powell to Condi Rice to Hillary Clinton, we are still playing the containment game with Russia. Even after the collapse of the Soviet empire, the U.S. still aims to isolate Russia, thereby curtailing her efforts at military expansion.

The problem with this approach is that Russia shows little desire to engage in military adventurism. That is instead a role the U.S. occupies in today's world arena.

Our military forces are addressing a Warsaw Pact that no longer exists. So while the comment of McChrystal's henchman was true, there is an odd and disingenuous ideological grafting which is prevalent in the COIN crowd: They justify the continuation of the war in Afghanistan using Cold War logic, and the same language which justified the U.S. occupation of Korea for 60 years.

They speak of The Long War with glee, but to use Korea as justification is an absurd position. The North Koreans are a tad more of a threat than are the al-Qaeda in Afghanistan, which total probably less than 200.

The bold Coindinistas are, like the General they dismiss, caught in a Cold War time warp; they just don't know it. It made more sense back when Communism was they bogeyman; at least then it was nation-states against each other. Now, it is a nation-state opposing less than 1,000 people.

The COIN proponents are too stoked to see what an ideologically odd gryphon to which they pay homage.
________________

posted by rangeragainstwar at 12:57 PM

"There is an unwritten rule among competent soldiers that says, never criticize your contemporaries. This is both self-serving and prudent, as have all done something that can be seen as deficient."

This is actually a question of culture. There ARE armies that behave very differently, that allow lively internal debate and merely scale it back in multinational environments in order to not neutralise themselves.

I would say, rather, that the rule is that you praise in public, criticize in private, which is pretty much what Sven is describing.

What I would take issue with is not so much the not-cricizing in public but rather the extent to which we have constructed a PAO edifice that spends a ton of time and money puffing up our military geniuses. When you make an ordinary trigger-puller like McChrystal into a Savior-General it 1) goes to his head, and 2) makes it hard to then make intelligent public policy about him

with the end of the soviet era the miltary industial complex began thrashing about like a wounded beast looking for an excuse to continue to exist. the pwot is the current raison d'etre.

the heavier the brass the browner the nose and the nose follows the money.

kiss.......is there really anything else to say about this?
avedis

Sven,
Our debate usually takes place in the various professional journals that are official publications.
These are seldom read by the MSM.
Debate and back stabbing are two different animals.
jim

Ranger, let me recount an example: A German general wrote a memoir and included a chapter on the time when he lead SHAPE.
He described the different mentalities. The Brits officers were very career-oriented and extremely disciplined, one bloc with one opinion - the opinion of their highest-ranking member.
The Germans in comparison were difficult to keep from arguing fiercely with each other. They had no respect for a party line' and little respect for rank in comparison, and valued arguments and smart ideas instead.

The only reason why it was necessary to turn them into a more disciplined crowd that didn't argue with each other 'in public' was that they neutralised each other, so there was no German weight in the discussion if they didn't adopt a unified position on an issue.

The only reason why they shouldn't discuss was indeed that at some point, a decision had to be made. Other cultures do not appraise discussions even before a decision was made.

It is perhaps unfair to make such a broad assertion based on your example. Your comment seems to have a GER bias.

Actually, I forgot to write "Some ...", as is evident by my choice of the word "armies" (plural) in my first comment.

Russia (if in fact they are our enemy) and the rest of our perceived enemies need only sit on the sidelines as we spend our way into Military Oblivion with the lives of our young men and women.

Yes, and I would add, the power of neurosis (and hubris -- which may be one manifestation of aforementioned) to lead to one's undoing.