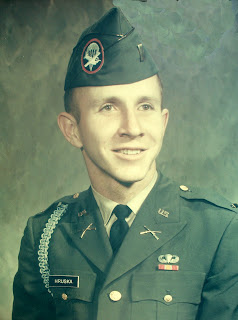 Cause I'm a million miles away
And at the same time
I'm right here in your picture frame
--Voodoo Chile, Jimi Hendrix

Also, 2LT Ranger Gene Holder, a fine and strong soldier. Both Buddy and Gene served in the 101st Abn, Div in RVN 70-71. The last time I saw Ranger Gene was in country.]

I recently retrieved a studio portrait of myself as a 2nd Lieutenant, one each taken December 68. Here is a smiling young troop who was at that time already a veteran though never having left CONUS.

My mother viewed this picture every day of her life until she passed the point of comprehending life, but to her, the photo was a memory of an illusion. The memory is what was important, not the truth, which remained unknown to her. The photos made her proud, but she never understood or questioned what lay below the surface.

The crossed rifles were unbloodied, but she never asked or cared to know about the reality of these symbols. The novice jump wings were a ticket to the future, delineated as soldier or veteran. Ahead was the promise; now is the memory.

So what is memory? Old and new soldiers have different memories and emotions. Mine are those of an Infantry officer, and most are of non-combat service, but it is the former that defines the parameters. My peaceful combat-oriented memories include:


Heat or cold. Both so debilitating as to produce paralysis on a soul. Of the two, the cold is more vivid. Canteens frozen so hard that the only way to get a drink was to de-ice them under one's armpit. Sleeping on frozen ground without blankets, exhausted to the point of collapse.

Fear. Even in training, death was always possible and injury a sure-fire thing is one wavered even slightly. Before actual deployment we saw many good men injured and permanently disabled, disqualified from future service. Only a fool would ignore this fear, and it is not even yet a combat environment.

Hunger and Exhaustion. While in training and as a member of a line division in Europe, I remember hunger. Always hungry, always cold. I remember exhaustion to the point of hallucinations and disorientation. I remember stopping and falling to the ground asleep, my rucksack still on my back.


I remember Ranger Buddy on a frozen mountainside, lying there like a wounded animal, which he was; an animal broken beyond normal exhaustion, never to walk normally again. I remember the whimper of this strong, brave friend. This whimper defines my memory of my Ranger training, nine weeks distilled into the single whimper from a broken body.

That was the day affect fled my body and misery and pain overcame any thoughts beyond my next footsteps in a long march. This is not a whine, just a statement of my experience. Rangers did what we do.

We rucked up and moved out, perfecting the skills of leaving broken bodies behind while looking for bodies to break in the execution of our profession. We were soldiers first, and distant from empathy, our rifles not chambered for sympathy.

If I had been wiser and more mature, it would have been evident that we were disposable, interchangeable and of little consequence to anybody but ourselves. But our photos remained on the walls for our mothers to view, standing in silent protest to this fact.

posted by rangeragainstwar at 7:47 AM

Good post. On this Thanksgiving Eve I'm hoping that you never had to eat turkey slices out of those funny little green cans for Thanksgiving chow.

Hope both of you have a good, thankful day.

Hope you had a peaceful day, too. I am thankful every day.

"If I should go crazy, if I would go blind
I'd still fill the canvas from the pictures in my mind
If that's the only way to make you mine" ~ Bon Jovi

Talking with you this morning reminded me of this song. Even though the "now"was gone, she held you in the "then". Blood wings... Great post, sir.

Thanks for visiting, LWA.