RANGER AGAINST WAR: Relative Worth < 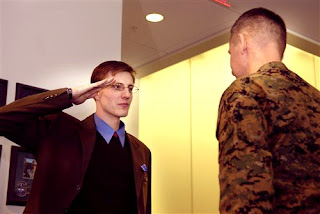 And I believe we need heroes,

The ultimate measure of a man is not
where he stands in moments of comfort and convenience,
but where he stands at times of challenge and controversy
--Martin Luther King, Jr.

Aspire rather to be a hero than merely appear one
--Baltasar Gracian
__________________
In continued consideration of the Medal of Honor, let's compare Staff Sgt Salvatore Guinta's recent MOH (the first living MOH recipient since the Vietnam War) to the Distinguished Service Cross (DSC) awarded to Private First Class Stephen C. Sanford.

The short and sweet question is, why did Guinta receive a MOH when Sanford received only a DSC? What differentiates their actions? Even patriotic site BLACKFIVE posed the following question regarding the dearth of coverage on the actions of PFC Sanford: "Read this and ask why this story hasn't been all over the media. It was released more than 8 weeks ago...only the Army has information on it. I found no media services have picked this up at all..."

Sanford was wounded in the initial burst of fire, yet he elected to continue the assault. He repeatedly assaulted into the face of the enemy though wounded, receiving two "potentially fatal" gunshot wounds in the service of saving and protecting other soldiers. He administered combat life-saving while under direct fire, sustaining two additional solid hit wounds while so doing.

Objectively reading the citations, it is clear that Sanford exceeded the requirements for the MOH, and in fact, his actions exceeded the valorous acts of SSG Guinta.

Of the eight MOH's awarded in the Phony War on Terror (PWOT ©), three have gone to Special Operations Forces - Special Operations Command assets and five to the rest of the entire military. That is a heavily weighted fact. Is the SOCOM more valorous than regular line soldiers?

This is not a criticism of SSG Guinta, who is a fine soldier and an MOH-worthy recipient. The sole purpose is to question the apparent bias in the conference of this prestigious award. If Guinta deserves the MOH, then so, too, does Pvt. Sanford. That is as clear as a front sight on an M4 carbine.

posted by rangeragainstwar at 3:51 PM

You know these awards can be upgraded. Senator Inouye's DSC from WWII was upgraded to the MOH so I'm confident Stephen Sandford's DSC will be upgraded eventually.

My take on awards? Let's take the unit you served with in VN. It was without a doubt the most highly decorated unit of the war. It sustained over 100% casualties. Likewise, so few people remember or are aware of your efforts or sacrifice. What does that say?

Hi. My name is Sarah Hiddema, and Steve Sanford is my boyfriend.

A couple months ago, I started to talk to people (friends and family) about starting the process of upgrading Steve to the Medal of Honor. I have written to our senator, but am unsure about how to proceed after that. I think, however, that the more people saying that he should be upgraded, the better. So I am starting to comment on blogs and stories like this one, hoping that people will write to their senators.

Steve himself wants this, but not really for himself. He thinks that if he is upgraded, then other wounded vets might start getting the support that they desperately need.

As for myself, Steve and I have a son, born this past July. I'd like him to grow up knowing that his father got the recognition he deserves.

Sarah,
Upgrade to the MOH is EXTREMELY DIFFICULT,but in this case istm that SS exceeded the requirements for the award.
As an old soldier i am impressed with his actions,and wish him the best in his life.
I will support his efforts/cause in any way thru my essays.
jim

Sarah,
Here is my advice.
-get your Congressman/Senator in your corner.This is req'd by regulation.Fortunately your witnesses etc. are still alive and available for action.
-You need to apply officially thru THE BOARD FOR THE CORRECTION OF MIL RECORDS.
-I'd gather support from Plat members/ Chain of Cmd from Plat to Bde supporting the upgrade action.
-The problem is that the citation is complete, but the chain ONLY approved a DSC.I say only with no disrespect.
-To get a medal upgraded you need additional info to justify the upgrade.Hence letters from all involved. Surely ANY CDR would support this action as it brings honor to the unit.
-You can use my article as your justification statement. I think that i cover most of the bases.

I am available to assist.
jim