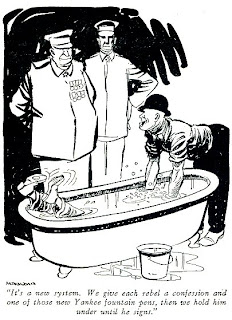 We have to work, though, sort of the dark side, if you will ...
it's going to be vital for us to use any means at our disposal,
basically, to achieve our objective
--Vice President Dick Cheney

[E]very one of these dead noncombatants represents
an alienated family, a new desire for revenge,
and more recruits for a militant movement
that has grown exponentially
even as drone strikes have increased
--Death from Above

Cheney's statement above got the torture ball rolling, with few raising any serious objectives to the criminal behavior to follow.

We wonder what Cheney's "objective" defined. Was it the defeat of terrorism, or the subversion of the American concepts of legality. If the former, that is a goal more ridiculous than Neville Chamberlain's "Peace in Our Time", for at least somewhere there is peace; for terrorism to be defeated, it must exist nowhere, and that menace will never be eradicated until humans in unequal positions with grudges are eradicated.

The books The Dark Side, by Jane Mayer, and Torture Team, by Philippe Sands address the U.S. approach to achieving Cheney's objective:

The U.S. courts have failed in their legal responsibilities to address crimes that violated U.S. and International torture statutes. This sidestepping has been achieved by invoking "national security" issues as superseding the law. However, at least one court in Italy has tried U.S. agents in absentia, finding them guilty of kidnapping and illegal renditions.

At some point, a court will address U.S. leaders and followers for their role in these illegal acts. The argument that the U.S. President may order illegal tactics to secure the U.S.'s well-being does not wash, as even the POTUS is subject to the rule of law.

Unless the courts address the issue, presidents can create endless wars via murkily defined and assumed spurious wartime powers.


NOTE: Today's NYT calls for "some measure of accountability" from the Bush administration, this time regarding the C.I.A.’s decision to destroy torture tapes in 2005 "rather than submit them to the judge for a decision on whether to order their public release ... a serious affront to the court and the rule of law" (A Case for Accountability).

I for one would be schocked if any one does time except so low level operative with no connections and can’t tell on others because they don’t know were the orders came from. If fact I’ll be stunned if they even open a case on any of the gwb or o dealings. Hell they can’t find anything on Manning and he is still locked down. I think o well release pollard in the next year and he should have been locked away for ever.

Jim said he saw your moniker on the Daewoo website yesterday. I know you are also a wine aficionado after stumbling upon you @ the Grey Report.

You are an eclectic person :)

Hi
I have no idea who Daewoo is, please help. Yes I do wonder around the web some are thought provoking sites such as this one and many others. Then there are some that are just plain fun. I listen to this station http://www.kozt.com/default.html and came to the area for the crab cake/ wine feed. Then there was an ad on the same station for this a week later http://www.littleriverinn.com/dining/crab-and-sake.php so I’m going there tomorrow. Gray always talks about the different taste of sake and since I’ve never indulged in this vice, it should be fun.
If you ever get to this area this place has some really good beer. http://www.northcoastbrewing.com/
Oh and the weather has been sunny and in the mid 60s very rare at this time of year. At home in the Central Valley foggy and cold, but nothing like the rest of the nation is seeing right now.
jo6pac

I'm glad the weather is so obliging for you. Someone has your handle @ Daewoo -- must be lots o' beer connoisseurs :)

Thanks, I own a weapon but haven't visited any sites like that.
Have safe weekend and may be on Monday Egypt will have a new leader.
jo6pac