RANGER AGAINST WAR: The Medal of Honor and The Messenger <

The Medal of Honor and The Messenger 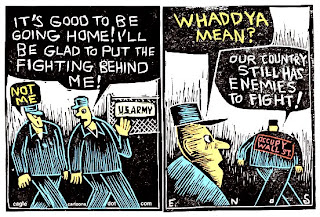 I was recommended for the Medal of Honor

but it was downgraded to a letter of reprimand

McClatchey News reports, "[C]rucial parts that the Marine Corps publicized and Obama described are untrue, unsubstantiated or exaggerated." Before this allegation, RangerAgainstWar had suggested that the Murphy, Miller and Guinta's citations shared the same problems, as well. This overview was written before reading the source article, because he does not want that writer's views to affect his thinking. (After surveying the materials, he will write a detailed abstract.)

Some recent history on military commendations is in order. Ranger has been where Medals of Honor used to grow on trees when he was assigned to 5th Special Forces Group (Airborne) in 1970-71 in the Vietnam War. When Bennie Adkins was nominated for his deserved MOH in the late 1960's, General Westmoreland went on record to ask the 5th Group Commander if they were "running a Medal of Honor factory"; Bennie did not get his medal.

The awarding of the Medal of Honor -- the military's highest valor award -- has often been contentious. Army SF scuttlebutt Vietnam era was that Captain Donlon received his MOH because President Johnson wanted to ramp up support for the war; Captain Carpenter's MOH was rescinded because the facts did not corroborate with the citation. General MacArthur and General Wainwright received what could be described as political awards of the coveted honor (in 1941 and '45).

Ranger contends that the Phony War on Terror (PWOT ©) MOH winners have exhibited conspicuous tactical bravery that did not translate out to anything of military value for anybody concerned. Fighting and killing with no larger purpose is butchery, not soldiering. The purpose of combat is to achieve tactical success to influence the strategic goals of a Commander. Or, battles are fought to achieve a decisive conclusion to an otherwise dull brawl. While this should be the case, in actual execution it is not always achieved.

In the Civil War, General Lee produced brilliant tactical victories (at Seven Pines, Antietam, Chancellorsville and Fredericksburg), but he never exploited his successes to achieve strategic dominance. All the killing was simply a butcher's bill. Likewise, General Meade did not exploit his success at Gettysburg, hence it was much motion with little strategic progress. Unexploited victories are wasted motion.

When Medals of Honor are awarded simply for killing and tactical prowess sans further benefit, they are meaningless, like the above cited battles which were also filled with overwhelming examples of conspicuous gallantry.

Back to 5th Group in Vietnam, and specifically the MOH's awarded to the classified Studies and Observations Group (SOG). The SOG MOH's differ from Murphy's, Miller's, Meyer's and Guinta's in this way: They were all awarded for strategic reconnaissance and/or exploitation of strategic intelligence gathered by the teams. The death and killing served a larger strategic purpose.

Whenever a SOG reconnaissance team was shot out of an Area of Operation, these were always bloody meeting engagements. When our exploitation or hatchet forces would go in to exploit the meeting engagement or the intel derived therefrom, this would then be a planned attack. The ensuing violence had a military purpose.

The mentioned MOH's awarded in Afghanistan lack any purpose beyond the immediate slugfest. The violence served no larger purpose, and violence without purpose is not a military concept.

NEXT: Commonalities in the Afghanistan Medals of Honor citations

posted by rangeragainstwar at 4:07 PM

'Ponst returning from R&R back in the day, happened to be on a bus driven by an Aussie.
Being the last passenger to depart, we had a little time to chat. He asks if it's "really true that your government gives you fellows a medal for getting wounded?"
"Yep", I answer" it's called a Purple Heart. What do you fellows call the one your government gives you for being wounded?"

"Criminy, mate, our government tells us NOT to get shot."

After the PAV poured an afternoon's worth of 122 rockets in on us, XO came around wanting to know if anyone got hurt so he could put in the paper work for purple hearts.

"All the killing was simply a butcher's bill."

Aside from tactics, you are talking about responding to guerilla warfare (GW)--the same type of fight we did against the British in the American Revolutionary War. The GW did develop into some set piece battles back then. I would like Ranger to have included some discussion about the GW aspects his Afgan MOH's encountered.