RANGER AGAINST WAR: Once More With Feeling <

Once More With Feeling 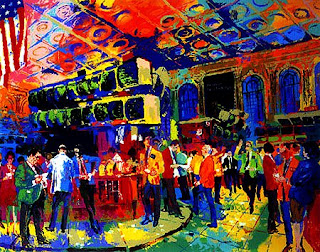 A plague on both your houses.
They have made worms' meat of me.
--Romeo and Juliet (III, i)

The end of our story
Is there on the door
A cottage for sale
--A Cottage for Sale, Billy Eckstine
_______________
A major feature of Post Traumatic Stress Syndrome (PTSD) is recurring nightmares that plague the mind. There are parallels to current life in our late, great nation.

The country voted for change in '08, but all we see is George Bush's shadow -- Groundhog Year, '09. The economy is dying, yet the administration has not turned its face from the same old programs and soporific words. In an argumentum ad antiquitatem we are told: "The bankers are screwing us, but we must bail them out so they can continue to screw us." Uh. . . and why might that be?

Ditto the Phony War on Terror (PWOT ©): the change we are getting -- mission creep into Pakistan -- is not the change we wanted. Our reality has become a looped nightmare.

Here are the pertinent intelligence questions which should be answered prior to the employment of another troop or dollar in the PWOT:


These questions have not been raised, let alone discussed, by our wartime Commanders in Chief.

If the U.S. really wanted to show al-Qaeda they don't mean diddlysquat, we would walk away. Our actions validate their institutional goals.

posted by rangeragainstwar at 9:47 PM

Sounds like the "politics of fear" raising it's ugly head again and al-Qaeda not being tied to nation-state boundaries sounds like a ticket to endless war for the IMC.

Here's a link to some interesting insight on Pakistan

Yep, it makes sense but something tells me the leader of the country is not going to make the right choice as he sends more people to lost cause. Russian Generals that were young officers in their lost most just shake their heads in bewilderment. MB has pointed out more than once the history of this region and it's not freindly to any one. It's all about the minerals once again.
jo6pac

I can't help but think that we moved to the second part of "Pride cometh before the fall" in which we are in the "fall" part.
We certainly have "fail!" wrapped up in a nice tidy package.

And I like, "Pride goeth before destruction, and an haughty spirit before a fall," in the sense of pride in its proper sense -- it has done gone.