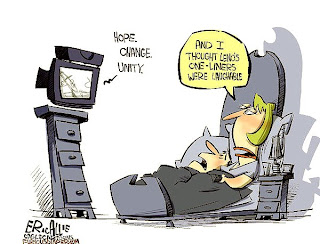 "What are you fighting for anyhow?"
his captors asked, looking at him.

They were genuinely puzzled,
for he obviously owned no slaves
and could have little interest in
States Rights or even Independence.

Since 2000, the U.S. has lacked a clearly-articulated national economic policy. The bailouts and stimulus packages eating our tax dollars are the indicator.

While Bush may be history, Obama's White House follows closely his example. U.S. fiscal policy is purely reactive. During the days of the campaign we were asked to have great hope, but with the installation of institutional thinkers throughout the Cabinet, that request seems disingenuous now.

In addition, we are not told of Plan B's. In the event of failed bailouts, the taxpayers have no idea what to expect as the next move. This is our money, after all, so we have a right to know its application.

Ranger wonders why we still cling to the myth that there are two actionably distinct political parties in America. It is hard to see any major policy changes, beyond the rhetoric.

Both parties love to spend money we do not have and cut taxes while concurrently increasing Federal spending. That is madness, and tax cuts are not fiscal policy.

Obama, like Bush before him, strikes Ranger as more of a cheerleader than a national leader. They were both cheerleaders in business suits. Does this guy ever tire of preaching to the television cameras? The cadence works well for a one-hour church service, but it is becoming tiresome as a matter of public policy.

It seems that both are empty suits, the only difference being that George Bush knew he was dumb.

A SOFA should be in place if Afghanistan was in fact a sovereign nation. We cannot win a war in Afghanistan when we cannot enumerate legal responsibility with the host nation.

What's on your mind?

posted by rangeragainstwar at 4:31 PM

That's a very good observation. "Reactive" is the perfect word. It's like the economic version of Clinton's fly-by-the-seat-of-your-pants foreign policy that Republicans loved to lambaste. I'm surprised I didn't make that observation.

But we're not seeing economic policy as we're seeing so many Dutch boys trying to plug the dyke as the leaks spring out. And the little Dutch boy's running out of fingers rally fast.

JP,
Welcome.
As you know from your training, either you act or you react. Leaders always act- what does this say about US foreign and domestic policies.?
Reacting is the losers pace.
jim

Yep, I agree the Demos are in control and the just as misguided and spineless as ever. O is just what I thought he would be. Hell the people around him are from gwb or clinton no forward thinking there. Wall Street continues it meltdowm into uncle milton brave new Amerika and we never learn that the worlds mineral isn't for just us. It's sad to see but it has become alittle interesting with Protesters showing up at AIG ex home. Come on Public wake up to what your friends did to you.
jo6pac
Some good stuff RAW

Well obviously our government doesn't consider Afghanistan to currently be anything close to a sovereign nation since they're considering changing that nations government. again.