RANGER AGAINST WAR: Passing the Buck < 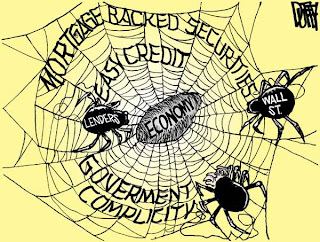 The subprime mortgages were a Ponzi scheme enacted by bankers and facilitated by government encouragment and negligence. The mortgagee could not afford a prime mortgage or saw fit not to use one (flipping) based upon the assumption that holding the property for a short period would ride the spiralling market to a big paper profit. Money for nothing.

It was part of a New America where profits grew on mortgages that one could not afford, yet felt entitled to. Those with interest-only mortgages were making money with funds they didn't have on certificates they could not pay when the imaginary profits failed to materialize. The only way they could pay is if they "flipped" the property, continuing their small part in the pyramid project.

This was all done with government concurrence and sponsorship. The same government that recently indicted Mr. Madoff for doing the very same thing.

When it was reported A.I.G. would pay $165 million in bonuses to executives in the financial products division -- the unit that brought the company to the brink of collapse last year -- Edward M. Liddy, the government-appointed chairman of A.I.G., said "at least some bonuses were needed to keep the most skilled executives" (AIG Bonuses).

Liddy wrote Treasury secretary Geithner, “We cannot attract and retain the best and the brightest talent to lead and staff the A.I.G. businesses — which are now being operated principally on behalf of American taxpayers — if employees believe their compensation is subject to continued and arbitrary adjustment by the U.S. Treasury”

One could substitute "slimiest weasels" for best and brightest. (The financial products division "wrote trillions of dollars’ worth of credit-default swaps that protected investors from defaults on bonds backed in many cases by subprime mortgages.") Maybe we need to let the rats jump ship.

Yet America hopes not to rock the boat too much. It had a great scheme going for a while, until they didn't. Richard Cohen wrote in the WaPo, "The financial instruments that Wall Street firms were both peddling and buying are the functional equivalent of particle physics. To this day, no one knows their true worth" (Don't Blame Jim Cramer).

Many would like to build the same house up again. However, like so many children's building blocks, they are destined to tumble down again.

It seems to Ranger that the stimulus package and bailouts are exactly the same thing as interest-free loans to private borrowers. Our elected leaders are attempting to build or salvage a national economy with money that we do not have on businesses which have already failed, hoping that when the note comes due the people will be able to absorb the note.

We do not have the money to finance the stimulus program, nor does it appear that any thought is being given to the pay-off on the note -- the looming balloon payment. The printing presses roll on, the national debt increases, and we cannot even pay off the interest.

The U.S. is operating as the citizen who finds himself at the Payday Loan Office, or signing that interest-only mortgage.

What is left to cover the balance due? Politicians always pass the bill, and accountability remains for some down the road moment. This is why Madoff went to jail; his scam caught up with him.

Our national financial policy is like the interest-only mortgage. The $787 Billion is not correcting the core problem. It pays the interest on a loan we cannot amortize.

How do our politicians differ from the infamous Mr. Madoff?

"How do our politicians differ from the infamous Mr. Madoff?"

Well, hmm...the best I can say, which really isn't a resounding vote of confidence, is that the comparison between Madoff and the crew at the helm of the USS America is slightly imperfect.
Slightly.
/sigh
I'm still learning a lot about this whole situation, and to be honest the blame can be spread out amongst a whole lot of people...and that would include us, the citizenry as well.
Let me see...how to construct this thought...

Okay, here we go...the main problem is that China and India had a sh*t load of dollars which they whole heartedly sank into Freedie and Fannie.
To the tune of 40% of their GDP, five of billions, upon ten of billions being dumped into American financial institutions.
As I said, a whole sh*tload of cash.
These august financial institutions had to do something with that money or else loose it; and so they did...lowering the requirements for schmucks like someone I know, and worked with to get a piece of that pie even though he should have never been allowed to walk into a bank much less be mailed a credit card.
I digress.
How they did that is where the government and it's whole, "oh noes, no regulations, they, the financial institutions can regulate themselves!" allowed them, the financial institutions to govern themselves, and so...voila, new improved, and quite relaxed lending rules.
Oh, the repayment is the same, if not stricter and more favorable to these insitutions. But oh yeah, dip right on in and grab as much as you want!
Pay us back later, we can wait...well, oops, not so much now.

So, these new rules allowed people who made 14k a year to buy a 3/4 million dollar house that they couldn't afford to pay a monthly payment on much less the paper that the contract was printed on.
And to add insult to injury...sorry, I mean, to increase the buying power of the purchaser, credit lines on the houses that they can't afford to begin with are now available to them, so... BOOYAH BYOTCH, GIVE ME THE SECOND MORTGAGE CAUSE DADDY NEEDS A WATER SCOOTER!

The fault then is spread out...
The Government for not curtailing the greed of the Finiancial institutions who do what they do...it's just that they were caught up in the feeding frenzy as much as the people they were throwing money at.
And the American people who have been living a fantasy life on someone elses dollar, never giving a thought that a dollar borrowed is a two dollars that have to be paid back.

In short, the American public, along with the Financial institutions, and the Government's failure to regulate the economy all played the Madoff game.

And now, the American people want someone to blame...how convienent, and how typically human.

The real problem is that there is a flawed assumption with the reasoning's of the banks, the insitutions, and the government denizens in this whole mess which is that all those homes, i.e. toxic assets, will rebound to their worth of what they were sold at.
Not realizing that those days are over. Those homes that sold for $750,000.00 are no longer worth that amount of money. They are worth far less...but "the audacity of hope" is that they'll go back to those prices...and so, the banks hold on to those toxic assets and that is what makes these banks...insolvent.

sheer,
If you have the time try reading Suskinds book THE PRICE OF LOYALTY about Paul O'Niells experience as SecTreasury.It's amazing and I seriously wonder if anything is gonna change under Obama.
jim

"and I seriously wonder if anything is gonna change under Obama."

I'm going to be generous here, and say that for me, my expectations of Obama is that he doesn't make things worse...after the last eight years I'm afraid my expectations has dropped significantly in regards to the capabilities of the US government to function like adults.

On our Nation’s stage, only the scenery has changed. The cast, intrigue and machinations remain the same… today, the principal actors hide behind the curtain where they manipulate with ease those who act the parts before your eyes. Most of these actors have already disappeared, so new ones have appeared to play the same roles. [The revolution will never succeed] … when the lower classes are left alone to struggle against the upper classes. Sure, at the moment of insurrection, the people will smash everything down by sheer numbers; but whatever advantage they may gain at first, they will always end up by caving in for since they find themselves bereft of intelligence, culture, wealth, arms, leaders and strategies, they have no means of defence against those magicians full of cunning, craft and artifice. If the educated men, the well off, and the crafty ones of the lower classes, first sided against the despot, it was only to turn against the people after they had wormed their way into their confidence and used the people’s strength to set themselves up in the place of the privileged orders that they proscribed. Thus it is that the revolution has been made and sustained by the lowest classes of society –the workers, the artisans, the little tradesmen, the farmers, by those unfortunates whom the shameless rich call scum and whom Roman insolence called proletarians. But who would ever have imagined that it would only end up helping small landowners, lawyers and con men… Today, after three years of endless speeches from patriotic societies and a deluge of writings… the people are even further from knowing what they should do to resist their oppressors than they were on the very first day of the revolution. At that time they followed their instincts… Now, look at them, chained in the name of the law and tyrannized in the name of justice, they have become constitutional slaves!


jean-paul marat (who, like danton and robespierre, makes more and more sense to me every passing day)