RANGER AGAINST WAR: The Fifth Day < 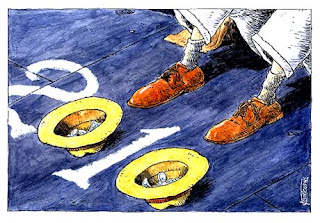 Michael Kountouris (Greece)
The Grinch hated Christmas -
the whole Christmas season.
It could be, perhaps, that his shoes were too tight.
Or it could be that his head wasn't screwed on just right
--How the Grinch Stole Christmas! (1966)

On the fifth day of Christmas,
my true love sent to me
Five golden rings

If a nation expects to be ignorant and free,
in a state of civilization,
it expects what never was and never will be
--Thomas Jefferson
_________________
The mind wanders in times of joy and holiday spirit. The wonder is, where is my ration of these goodies? And Ranger knows he is not alone in these feelings.

Just look around and absorb the tenor of the nation. We are in a grim time, and sweet government words will not change the reality. America is suffering on so many levels, yet we continue the march and pretend that our leadership has The Answers and is working in our in Our Best Interest. Bah Humbug.

Many Americans no longer believe in our government's ability to preserve our way of life. They are the depressed who have been out of work for months (Poll Reveals Trauma of Jobless); the Medicare recipients who will not receive a cost of living adjustment for at least the next two years; those who have lost their retirement investments due to the greed of some -- their numbers are many. Yet we continue to allow Congress and the Executive branch to forcibly impose our grand system on sandbox nations wanting nothing to do with it.

Face it: There are people that do not believe in Santa Claus. Even if they did, the Jolly Fat Man would avoid their street for fear of IED's.

This Christmas season Ranger salutes the memory of Doug Bohlenbacher, old friend and former Marine who popped his own balloon Christmas Day '08. He was a Marine who also had the good sense to become a paratrooper.

Merry Christmas to all the Doug's out there. We hope you take a different route.

Every day you stay alive is another day of testimony and screwing the bastards.

posted by rangeragainstwar at 1:49 PM

Yep, the goal is to be a thorn because it's going to take the citizens of this dying nation to finally go to the streets like the French to try on stop its demise. I don’t see this govt. making any changes that help it citizens. I just received my last pay check Sat. but I can live on unemployment until I collect SS that’s if wall street and govt. don’t steal it by then. This country is quickly becoming like SA in the late 60s/70s Shock Doctrine. Greed at the highest level.
Here’s link on what’s been done to us as a nation. It won't stop until there is the very few with money and then the rest of us.
http://www.correntewire.com/how_status_quo_can_kill_example_free_trade
jo6pac

while i do agree that things are going to change, and maybe change drastically, i'm firmly in the "not with a bang, but a whimper" camp.

economic bubbles tend to not pop, but rather deflate slowly, almost imperceptably, kind of like a soccer ball. each shot, each pass, it loses a little of its air, until somebody lines up a corner kick and instead of a wicked curving shot on the goal, the kicker finds the limp ball wrapped around his ankles.

we are already seeing the next levels of degeneration. insolvent nation/states. (p.s. this would be a bloody wonderful fucking time to dump any and all investments that are pegged to the euro).

dubai, somalia, yemen, the list is growing every day. california and michegan are not far behind.

it is a quick and easy step for any government to go from insolvency to irrelevance, or even dissolution.

in the case of this, expect your life to be swiftly, and suddenly local. the mayor will matter far more than the governor or any out of town representative.

resiliant communities will be those that have focused on diverse methods of support and employment, who are near, or at the source of varied agriculture (not agribizniz, i'm talking farmers here) and various husbandries.

yeah, joe6, i've been reading my frenchies for over a year. things are very bad politically when the writings of marat and robespierre are the ones that ring the truest and make the most sense.

This seems like the right place to answer Lisa's question about my schizophrenic apologia. The first fully documented case of a "paranoid schizophrenic" was that of a James Tilly Matthews, a Londoner trying to avert war between france and england in the late 1700's. He went as far as to travel to france and made relevant contacts but was arrested for three years during the Terror. He was eventually institutionalized after returning to Britain where he publicly accused the Home Secretary of treason in the House of Commons.

Obviously no match for the war machine, his story is still extremely interesting and relevant to say the least. And good catch on the Laing ref. :)

Krishnamurti said, "It is no measure of health to be well adjusted to a profoundly sick society."

I'd go with that. There is no clarity when people are living within a chaotic belief system.