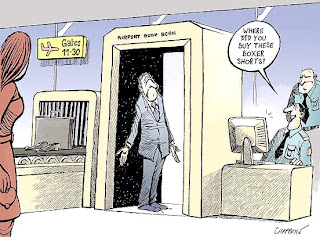 Everybody wanted to get in the newspaper story about it.
And they was using up all kinds of
cop equipment that they had hanging around the police officer's station.
They was taking plaster tire tracks, foot prints, dog smelling prints, and
they took twenty seven eight-by-ten color glossy photographs with circles
and arrows and a paragraph on the back of each one explaining what each
one was to be used as evidence against us. Took pictures of the approach,
the getaway, the northwest corner the southwest corner and that's not to
mention the aerial photography
--Alice's Restaurant, Arlo Guthrie
_______________
Some further comments on the hapless would-be Christmas day aircraft bomber, Umar Farouk Abdulmutallab.

It was brought to our attention that a recent t.v. program filmed the detonation of an 80 gram PETN device on a titanium plate using a hyperelectric charge, and the resultant blast ostensibly twisted and deformed the plate.

Ranger will address this fear-mongering:


If the bomber were a sophisticated and dedicated al-Qaeda operative with training and ability, he would have planted the device, primed it, and would have had it explode on the next leg of the aircraft's itinerary. Abdulmutallab's failed attempt demonstrates a very low-level of tradecraft.

The television tests are pure theater, with no relation to the reality of the explosive potential of this device.

The only lesson Ranger gets from this incident is definitely not to wear designer underwear. We're glad the basic brief is coming back strong (Even Less for Men to Think About).

posted by rangeragainstwar at 10:01 AM

I wish not acquiesce in on it. I over nice post. Especially the designation attracted me to review the unscathed story.

I would just like to take some time out Thank all the people for doing what you do and make this community great im a long time reader and first time poster so i just wanted to say thanks.

Yes, the television "tests" are true theatre with no connection to reality. But then, this "bombing attempt" was, also. The goal was to create an "anti-terrorism" reaction that would slow down commerce and further destroy the airline industry, not to blow up an airliner. And at that goal, Al Qaeda succeeded admirably.

Bad Tux,
Incredibly , we still don't get it.
How have we become so fearful and unrealistic?
We act like big bad asses but we quake in our boots.Except in airports when we are quaking in our socks.
I've resolved NEVER to fly commercially again.
jim

Ranger, we are a nation that has grannies waving signs saying "Teabagging for change!" and "Keep your government hands off my Medicare!". The notion that these intellectual giants should somehow manage to fathom that the TSA is doing Al Qaeda's work doesn't pass the laugh and giggle test. And, unfortunately, while the majority of Americans aren't teabaggers, the majority of Americans aren't any smarter than teabaggers. And that, unfortunately, includes our government officials too.

We're being out-thought by a bunch of lunatics who want to live 1,000 years in the past. How smart does that make us as a nation? Not much, IMHO.

Hi Jim and Lisa,
It seems to me that a bomb that was focused would have more effect, like a brass casing and a gun barrel focus the force of a bullet. Where would the force of a crotch-bomb be focused? Would the bomber's body muffle the blast? Also, wouldn't a bomb need some mass to be really effective? Kinda like needing big speakers to get big sound out of your stereo.
You can add UC and Mrs. UC to the lengthening list of people who refuse to fly.

UC,
The bomb to be effective would need to be focused as to direction and distance, since it was so small.
In the old days SF had a general formula for calculating the amount of explosive needed to perform a specific function.The formula was LARGE P.Simply calculated it meant PLENTY.
These devices we have seen asre pathetic and if he stuck his dick in a dyke it would not have breached the objective.
jim

bad tux,
I'll go 1 bridge further.
Teabags are smarter than some of the people claming to be Americans.
jim

web log is not actually placed in the search engines http://casinogamesonlinee.blogspot.com online casino