RANGER AGAINST WAR: Panties in a Wad <

Panties in a Wad 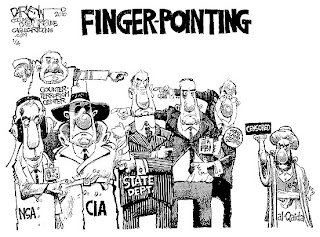 I'm a walking nightmare, an arsenal of doom
I kill conversation as I walk into the room
I'm a three line whip, I'm the sort of thing they ban
I'm a walking disaster, I'm a demolition man
--Demolition Man
_______________
A few words regarding the nuts and bolts of bombs and intelligence analysis per the Christmas almost-bomber, 23-year-old Umar Farouk Abdulmutallab.

The plastic explosive, which obviously clears airport metal detectors, is PETN, which was the same that al-Qaeda operative "shoe bomber" Richard Reid used in his soles when he tried to blow up American Airlines Flight 63 from Paris to Miami in 2001. In fact, Abdulmuttalab reportedly tried to use 80 grams of PETN to Reid's 50 grams, more than enough to blow a hole in the plane (Was Christmas bomber Part of a Bigger Plot.)

Imagine the horror of 80 grams (2.82 ounces) of PETN hung in a jock strap. PETN is a high order explosive, IF detonated. To detonate PETN, also the explosive found in det cord, it is necessary under normal circumstances to use blasting caps -- either electric or in conjunction with timed fuses. Neither technique was used by either previous shoe bomber-manque Reid or the unfortunate Mr. Abdulmutallab.

PETN is relatively stable and relatively difficult to detonate using expedient means. It was highly unlikely that either device, whether shoe- or underwear-bound, could be set off with a match-lit source. So why all the scare?

It is not a bomb unless it can go BOOM. Even if the 2.82 oz. of PETN were detonated, this would not have brought down and airliner. The threat has been overstated to the extreme. If anyone doubts this, go to the History Channel and take a gander at all the U.S. Army Aircorps birds of World War II that were still flying after being hit with high ordnance flak rounds.

Obviously, an expert demolition man might be able to do damage if the 2.82 oz. were strategically employed and correctly detonated. But that was not even remotely the case in either of the high-scare scenarios we are talking about here.

In the 1980's, a terrorist left a man's wallet with probably a quarter-pound charge of SEMTEX on an aircraft. All he accomplished was blowing a hole in the fuselage while the plane was in flight, after which the pilot safely landed the craft. The threat of the hapless Christmas bomber-to-be is overstated, and it was simply time for a woman (Ms. Napolitano) to have her upbraiding as did her predecessor, Mr. Heckuva-Job Brownie. However, the "failures" are far from commensurate.

While Reid and Abdulmutallab had every intention of doing a dastardly deed, and they did manage to carry explosive materials onto an aircraft, their capabilities and operational skills were inferior to their lofty goals. Intention is not doing.

Ranger wonders how these people will be tried for being bombers when it has never been proved that either device would have gone boom. Shouldn't there be a government burden of proof to show that these devices were, in fact, bombs?

posted by rangeragainstwar at 2:48 PM

'Shoulda, coulda, woulda, might have', is not only sufficient for a media and political frenzy, it is sometimes sufficient in the legal system too.

It is a long standing precept that non-functionality isn't a persuasive defense against charges of pointing an empty/broken gun at someone, and it would be unlikely to prevail in this case.

I agree that the media would so love to have a major disaster to bemoan, that they will inflate anything remotely scary until a real tragedy comes along.

here's the thing i see with this. it just might be that the folks who are wanting to raise all the hell might have figured out that we have a government of terrified bedwetters and that the bombs don't even have to go BOOM! to have the desired effect.

no boom with the shoe bomber, insane amounts of furor and crazified action. they fuck it up, we crack down further, abridge or obliterate more freedoms and allow government to become even more intrusive. who pays the price? we do.

no boom with padilla. as a matter of fact padilla probably couldn't fucking spell boom. yet, an american citizen was detained without charges and abused and tortured until his mind is now mush.

if they have figured out that nothing has to go boom for them to cost us in our economy we might just be well and truly fucked.

(as if we weren't already. oil started today at $80 a barrel, which is the lower end of the danger zone to all industrialized economies)

MB that about right even gold went up today but why is it a crazy person pops up right when needed. This bill is coming up and it should be put to sleep but there is still many that think the bad guys will stop if will loose more freedoms, that's if we have any left. That is what they Hate right?
USA PATRIOT Act
jo6pac

True that, yet we're so ready to quail, we don't seem to care :(

Cholo,
Attempted murder is different than murder.
My point is that this was an attempted bombing and therefore the punishment should be commensurate , if convicted.
If indeed.
jim

MB,
Our next art on RAW will mention Padilla and Lindh.
As you know, PETN is usually used as a kicker charge and usually not the primary ingredient in a device.
Strange days.
jim

What I find ironic - not to mention disturbing - is that while some clown wannabe's public weenie roast is grabbing national headlines, the attention of our fearless leaders and generally throwing the populace into a tissy, the real deal is walking into Spook HQ in Afghanistan - unsearched (!!!???!!) and escorted, none-the-less, by what should should be our top experts in this area of security - detonating a very viable explosive device, killing himself and seven of our leading Al Qaeda brain trust members.

Pardon me if I am lacking in confidence in our governments ability to effectively address....well, any of this.

Avedis,
Good linkage and tie in to this entire goat screw.
The thing in AFGH was pure hubris and arrogance-IT CAN'T HAPPEN TO US.We're big time in Japan.
jim

MB,
Bombs create terror specifically because they are unpredictable and indescriminate.They are also cheap and easily transported.
As you indicate they need not detonate to be effective-hence Reid and the Crotch bomber.
Our reaction is totally disproportionate to the threat.
Interestingly the IRA always used bombs to make a statement , even if it didn't explode. They did this as a matter of course since they had a real social agenda.
The present day bombers have no such restraints but they lack the skill sets of the IRA. This reminds me of the book-THE GANG THAT COULDN'T SHOOT STRAIGHT.
jim

Ranger, speaking legally impossibility is not an accepted defense to receive acquittal in most US courts.

Nor do I think it should be. Despite the most bellicose rhetoric from the warmongers, Terrorism has become subsumed into the System of Control. It's just another issue to divide and garner votes, to slime your political opponent to slap upon campaign literature.

The "Terrorists" did win after 9/11 and they continue to achieve an incredible rate of return upon the invest of one poorly executed mission featuring one man.

Gene,
The crotch bomber will be convicted without any question.
My point is that although illegal to board an aircraft with bomb ingredients does not necessarily mean that a bomb was on board. This is two different facts.
I'd sureely like a true expert to detonate a device with the ingredients and supplies on hand for the bvd would be bomber.
The AQ is not stupid, they invest a disposable 23 y/o dumdum and we in turn spend billions to close the barn door.
jim