"Nobody is listening to your telephone calls."
--PRESIDENT OBAMA,
defending government surveillance programs.

Well your nobody called today
She hung up when I asked her name
Well, I wonder
Does she think she's being clever
--Your Nobody Called Today, Sylvia

The right of the people to be secure in their persons,
houses, papers, and effects, against unreasonable searches and seizures,
shall not be violated, and no Warrants shall issue,
but upon probable cause, supported by Oath or affirmation,
and particularly describing the place to be searched, and the persons or things to be seized
--Fourth Amendment
_______________________

If your consumer life extends beyond cash purchases at Sears and Safeway, someone's got tabs on you. They sold the Internet to you as a World of Warcraft and other fun games, but now we know that the price of our amusement comes at the cost of the State's declared need for security in the form of data mining. But is the effort worth the cost?

President Obama tells us to get over ourselves; nobody's listening.  But he sounds schizophrenic when he says the government both is and is not surveilling our phone conversations. Everyone is hedging, with tech companies conceding to surveillance programs -- but "just a bit". Sorry -- you cooperate or you do not; the act cannot be mitigated.  And the trawling is done so quickly now as to obviate the need for justification of targets. David Bromwich gives a good critique of the "Total Protection Government" HERE. 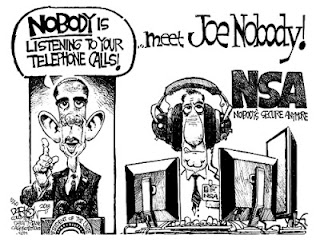 Even if you accede to your government's claims that snooping over your shoulder saves lives -- "What need I worry if I'm doing nothing wrong?" -- there are problems with electronic intelligence (ELINT) and intelligence in general. Usually, such a wide net collects too much data, and proof is never provided to justify the violation of our privacy. If the intrusion into our privacy is so crucial to fighting to terrorism, show us the data. The shelf life of these data intercepts is brief, and are designed only to develop link analysis and association matrices -- "mail trees" in pre-computer days.

However, the efficacy of these programs was based upon stable, non-mobile targets. Terrorism is based upon dynamic membership with rapid movement, implying the need for international cooperation between police agencies versus a unilateral isolated National Security Agency (NSA) effort. History shows manifold failures of such isolated intelligence: President George W. Bush did not synthesize the terror warnings he was provided in early August of 2001; the U.S. Navy fleet was in berth at Pearl Harbor on December 7, 1941.

Intel is useless if it is so highly compartmentalized and classified that it is not disseminated down to the action level. If these data collections were so effective, why doesn't law enforcement use them to eliminate the spree shootings we find so horrifying, for example? No criminal or terrorist venture reaches the execution phase without giving off intel indicators that the event will take place.

We are not children, though we may be useful idiots if we believe there is congressional oversight for these intrusions into our technological lives. We must define for ourselves what is intel and what is its shelf life.

Moreover, what do we do with it, --both when it is viable, and when it becomes rancid?

posted by rangeragainstwar at 2:33 PM

Right. Show us the data that proves all of this keeps us safe from terrorists. We're paying for it. You (Mr. G Man) work for us.

Of course it's all bullshit. This isn't about terrorists at all.

Every terrorist on the planet knows the NSA, CIA, DIA and who knows how many other acronyms are listening and watching.

They're not going to get caught up in this spyder net. Not even the lowly underwear bomber.

The same people that want to take our guns away also want to track us, our physical location, our associations and our thoughts (extrapolated from emails, blog postings, etc), like we're animals in some giant herd that is owned by and to be controlled by corporate interests and their government lackeys.

Welcome to the new slavery. And don't think about revolting because they know who you are and they'll get you, your family and your friends. We've been disarmed any how.

If you try to oppose them through legal channels they'll mine your data and dig up the dirt and wreck you before you get off the ground. Could be 4 or 5 levels of association, but dirt is dirt. Where there's smoke there's fire.

They've got us by the short hairs and they're consolidating the power and finalizing their master plan.

Clapper lied to Congress and then pretty much admitted to the perjury. What a smart ass. Why is he not as much a criminal as Snowden? Why is he not arrested?

No one.
I know that no one is some one.
If all the money spent on ELINT were well spent THEN why did we get caught with our dicks in our hands at the Boston Marathon?
Why has no one in the MSM asked this simple question?
jimp

They have mined MSM's activities and threatened them.

You may not like FOX, but they are part of the media community and look what has happened.

The federal government of the USA must be torn down brick by bloody brick. Go for the jugular.

Eric H,
I'm a patriot by birth and deed.
WE AT RAW DO NOT ADVOCATE REVOLUTION OR VIOLENCE IN ANY FORM.
jim