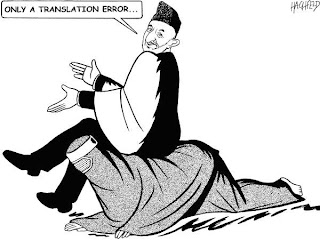 
Q: Why won't Baptists screw standing up?
A: Someone might think they're dancing

You know, we love to move around.
And, we're not supposed to dance at all anymore
--Kurt Vonnegut

You can fly if you'd only cut
Loose, footloose
Kick off your Sunday shoes
Oowee, Marie
Shake it, shake it for me
--Footloose, Kenny Loggins
_______________
Findley, Ohio, senior Tyler Frost was suspended from his Christian school after attending last Friday's prom at the secular school of his unfortunately-named girfriend, Rebecca Smooty (Ohio Teen Suspended for Going to Girlfriend's Prom).

We will not discuss the legality of the school's action (Frost had signed an agreement at the start of the year to abide by the school's policies) but rather, that there are schools and sects that believe dancing and girl's showing bared shoulders are the devil's handmaidens.

What is the difference between the Taliban and the policies of American Christian educational institutions like Oral Roberts U or Bob Jones? It seems just a matter of degree.

Why would God be opposed to dancing? This is probably one of the oldest forms of human social behavior, probably predating screwing standing up (though Ranger has no liturgical data.) Was the Christian's idea to distance themselves from the revelrous Pagans, when displacing their gods with the One True God ©, this God of stern mien who meant serious business? Stuff like tithing 10% and not using condoms. (The Ten Commandments was just prelude.)

In the beginning was The Word, and it was: No Dancing! (with echo effect.) He wants us to know, this will not be fun.

posted by rangeragainstwar at 9:33 PM

when ever they really want to put the damn damn of control down around the followers, the "shepherds" always go after music, and the other arts.

or, they will make it formulaic like they have with the current vogue of "praise" music. (ugh, ugh, ugh)

first though, they always fight it. palestrina was nearly burned at the stake for turning gregorian chants into glorious polyphony. motets that to this day are still being played because they can lift even my atheistic soul to transport it somewhere bright and clean.

for a long time, anyone who showed virtuosity on an instrument, like mozart who was born knowing how to read music and play the piano, pagannini, who did things no one had imagined could be done with a violin, liszt, who was like the jimi hendrix of the piano, he wrote for himself and it was nearly another 100 years after he died before someone was technically able to approach his virtuosity, all were labeled with the same accusation....

sold their soul to the devil to play or write like that.

i hope that kid grabs his GED, gets his ticket the fuck outta there, and dances throughout his life.

i'll find out what he likes to boogie to and play it anytime.

What a super observation on the marginalization and, in fact, damnation of musical prodigies by the church. (The homogenized "praise" music needs no comment.)

And that suspicion of artistic gifts persists to this day (see the crossroads myth and Robert Johnson.) I wonder why that is?

It implies something deep and dark about the desire of the church to subjugate its faithful. As the song says, "You could fly, if you'd only cut loose."

Didn't someone say that the definition of "Puritanism" is the deep, dreadfully abiding fear that someone, somewhere is having a good time.

I'd take MB's observations a bit further. It is in the interests of the sort of people who run these sects to ensure that their sheeple's time on this world is as dour, as grim and as joyless as possible. Since, after all, who is going to be on their knees day and nght, scoring points for the Afterlife (as Wierd Al once said) if they find out that they could be singing, playing, and working joyfully, or delightfully entwined, whether vertically on the dance floor or a bit more horizontally...

Hence all the "thou shalt nots".

IMO the various religions that use this sort of thing to ensure their adherants see their actions in this world and towards their fellow men and women as less important - as UNimportant - compared to their "heavenly reward" are dangerously close to the sort of thing that produced the Arnulf "Kill them all; God will recognize his own" Amalrics of the religious wars of the middle ages and early Renaissance.

yeah, the "sold his soul to the devil" line about robert johnson was put out there by preachers first.

the part they didn't anticipate was that when folks listened to him play, they would remember that whole soul selling part and think to themselves, good deal.what the preachers never seem to realize is that right now jesus is skanking to robbie shakespeare and bob marley, gabriel's jamming with satch, and the angels are all shaking it sweet with marvin gaye and jimi.

I have always thought that construction of sitting in the Elysian Fields wearing a white robe and sandals and just sitting around was a bit sterile.

I have a dear Baptist friend who tells me about the "Glorified Bodies" they shall receive upon death -- no sex, thanks. Just some kind of ethereal existence. Existing, just like most do in this life.

That is what they can conceive of. Existing, sans taxes for those damned social programs for colored people and ne'er -do - wells. That is heaven to them.

You can only imagine what Issac Watts went through when he decided that the droning monotone recitals that the Anglican church was burdening the ears of it's adherents with was far and above torturous as best.
G-d is not against Dancing.
G-d is for dancing.
Men...men on the other hand like to tell others how to behave...G-d is about freedom...men...well, men are about telling other men how they should behave.

As for me, the boy should have read that document more carefully, as should have his parents.
Never sign something you are against.
A lesson learned for this lad.

fuck me runningDamn I haven't heard that one in a while! I always thought it was one of those local Vermont things. One of my brothers used it all the time long ago.