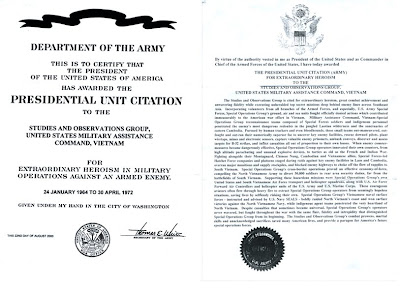 I'm about to give you all of my money
And all I'm askin' in return, honey
Is to give me my propers
When you get home
--Respect, Aretha Franklin

Smart lad, to slip betimes away
From fields were glory does not stay
And early though the laurel grows
It withers quicker than the rose
--To An Athlete dying Young,
A. E. Housman
_________________
This may seem a tempest in a teapot to those who have never been in military bureaucracy, but if they cannot get even this small citation issue right, that seems indicative of slippages in more consequential areas.

To recapitulate: Ranger finally received his Presidential Unit Citation in February after petitioning and being rejected by the Army's Awards and Decorations branch. It was only through intervention by Ranger's Congressman Allen Boyd, and his veterans assistant Michael Bishop, that the citation, awarded to the unit in 2001, was finally issued to Ranger. Although the letter of authorization and DD215 were finally sent, no certificate was sent.

Instead, what you see here is what he got: no heavy paper, no embossed seal -- just a plain Kinko's 3 ¢ copy on cheap paper.

The citation exists -- Ranger's father has his own PUC certificate earned in World War II with his name indicated on the document, and the MACVSOG PUC certificate has been posted online by its various recipients. It is on parchment, with blue embossing, and bears the official seal. (A Google search turned up a copy online posted by Ranger's associate Fred "Lightening" Wunderlich here.)

The HQ Department of the Army, Chief of the Military Awards branch, actually wrote my senator a letter saying the citation cannot be given to an individual recipient (me). If not to us, the recipients, then to whom? Maybe it just doesn't go to Special Forces officers who are audacious enough to write against the current wars.

What about, "We Support the Troops"? The Kinko's copy of my cert is a finger in my eye, and not a meet tribute from a grateful nation. To Ranger, this is a denigration of his service, and is indicative of the value placed upon his service. Soldiers are not given xerox copies of their awards.

The wording of the citation is even incorrect: twice it is given correctly as "Studies and Observations Group" (SOG); however, six times SOG is called "Special Operations Group" -- a unit that never existed! So 75% of the references to the awarded unit are incorrect. One would think that a document authorized by the President and signed by the Secretary of the Army would be technically correct.

Ranger is torqued that such a simple administrative process has morphed into a typical military run-around. As an aside, he has received his share of "Howdy, fellow snake eater letters" which are invariably from SOCNET sorts seeking to "blow his cover". They usually come back, tail between legs, touting their great contacts on the inside, and how they've vetted Ranger.

Well, if any of you patriots has a contact in awards and decorations, please help me find out why another patriot can't get his PUC certificate. If all else fails, maybe Ebay will come through for me -- they are selling MACVSOG unit citations here. The surrealism of this reality almost trumps Vietnam.

Thanks for your service, boys and girls -- now get lost.

posted by rangeragainstwar at 5:08 PM

I dunno, Jim.
Paper seems to trivial, and parchment, though impressively aesthetic to the level of honor being conveyed seems to lack the significance of import that is required.
The only fitting tribute would be a song, one that reminds both participant and non-participant of why this event being captured in song is being sung.
If only we had bards who could capture these things in song, that would be a far more greater tribute that a waxy piece of paper that fades with the memory.
You do deserve better, much better than what mere paper and ink could hold.

Most things in our society are so sanitized. If we had gritty rites of passage, and bards who commemorated both victories and losses, we might be more in touch with what a life entailed. Instead, we have Toby Keith.

Instead, we have people who go shopping to find meaning and identity and wonder why they feel like something is missing. Because it is.

I worked incidentally with SOG a few times and always heard it was "Special Operations Group".

A very common mistake. "Studies and Observations Group" was chosen b/c it sounded so benign and euphemistic.

After all, they were only going into Thailand and Laos (not officially) to "study and observe" -- what could be wrong with that?

If they were called "Special Operations," that would kind of, uh, blow their cover.