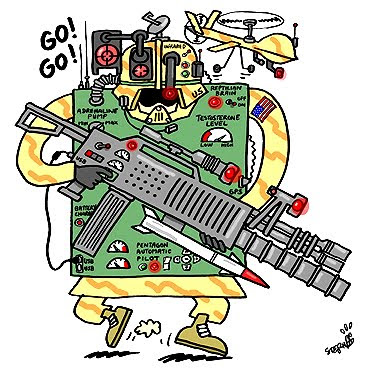 Across the field you see the sky ripped open
See the rain through a gaping wound
Pounding on the women and children
Who run into the arms of America
--Bullet the Blue Sky, U2

We see things not as they are,
but as we are
--Anais Nin
_________________
Ranger muses on the nature of reality, whatever that is. Perhaps the questions should be, what is relevant versus irrelevant.

Veterans often said that the war in Vietnam was unreal: it's nowhere, man -- get me back to the world. Ranger said it was Disneyland for soldiers, and 3-tour VN vet and associate Frank Callahan, SFC (Army ASA), always called it "Oz." (Frank later committed suicide.)

To pampered Americans, that VN was unreal passes for truth. But Vietnam, like every other backwater nation we intrude upon, was very real. We cannot accept a reality different from yet equally as valid as our own perceptions. The reality of the world out there is impoverished.

Vietnam was very real, but we are too cocooned to see that world. We think voting is real, and it is meaningless. The people we are fighting are ruled by despots (we support), so their choices are meaningless.

The act of voting is meaningless when you are a peasant. When one is a peasant, it does not matter who is ruling the country. The reality of the poverty of half of our planet cannot be solved by bombing them and forcing them to vote.

We are a nation of warriors that are actually pampered mama's boys. Ranger was no different. We lack substance because we lack a basic level of humanity or compassion. If you doubt this, sit anywhere you choose and listen to the ambient conversations.

If it is correct that we do not understand the reality outside of our Desperate Housewives bubble, then Low Intensity Conflict [LIC], Cointerinsurgency [CI] and Counterterrorism [CT] will never be successful. They lack a viable substrate of understanding. We live in a Twilight Zone.

Ranger solicits input from younger soldiers: How do you view the world after your deployments, and what role do you see for the military in solving the problems you see?

posted by rangeragainstwar at 11:14 AM

"How do you view the world after your deployments"
A place where we should have relationships based on trade, not coercion.

"and what role do you see for the military in solving the problems you see?"
None. I defer to Smedley Butler, defend our territory and bill of rights, that's all.

Thanks for this post. Too bad we cannot get those who reality tells us are in charge, to read it too.

JUniorAG said: "A place where we should have relationships based on trade, not coercion."

This is of course a paraphrase of the famous(to some of us) quote of Thomas Jefferson "Commerce with all nations, alliance with none, should be our motto". And it's a true today as it was over 200 years ago.

Junior AG,
A personal note- how did you find RAW?
I'm curious as to where our readers are coming from.
Glad to hear from you.
jim

Serving Patriot,
We've come to strange days in America.
Everybody wants to be the C in C but they want to avoid military service. I'm not saying that service makes one wise but it is a real eye opener-isn't it?!
jim

Indeed, it is an eye-opener.

Can't say that uniformed (or even governmental) service must be a pre-requisite to be the CinC, but those without it must come to the job with the desire to understand the professional govt/military, empathize with their experience, and call BS to their "unique" way of solving the nation's problems.

Unfortunately, I think the Citizen is too far down FDC's "Big Stupid" curve (I luv that moniker BTW!), or perhaps too powerless, to REQUIRE that the elected CinC enter office with the qualities above.

We certainly know this country's elites absolutely do not understand (or care). Witness, the AWOL ANG lieutenant who became President.