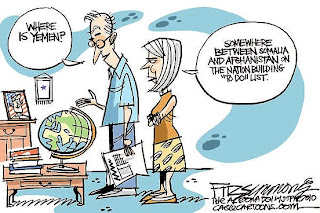 Oh, my piglets, we are the origins of war:
not history's forces, nor the times, nor justice,
nor the lack of it, nor causes, nor religions, nor ideas,
nor kinds of government, nor any other thing.
We are the killers. We breed wars.
We carry it like syphilis inside.
--Lion in Winter (1968)
________________
The key combat skill for an infantry officer is to be able to differentiate between effective and ineffective fire. Not all fire is the same, which may be a news flash to civilian readers. All rounds fired down range are not the same.

While all fire has the potential to kill you, not all fire can keep you from successfully completing an assigned mission. This skill of being able to differentiate fires is also applicable to life in general, for identifying and accomplishing the mission is the overriding imperative.

The civilian analog is the old saying, "Don't bark up the wrong tree." A coon dog can spend hours barking in alert to his master, but if the raccoon has skedadled up another tree, all of his effort is in vain. The mission cannot be accomplished if the correct target is not fixed.

Combat arms types will bypass ineffective fire in favor of applying their resources to completing the larger mission. Seeing the gestalt is more important than being distracted by discrete dissonant elements. This idea is especially applicable to the Phony War on Terror (PWOT ©) as it is being "fought" now.

There is symbolic fire being placed upon our unit by the al-Qaeda adversary, but the fires are ineffective and defined by largely by noise and nuisance rather than deadly volume or accuracy. To wit: The would-be Shoe Bomber and Underwear Bomber.

All other domestic threats have been equally ineffective, yet what do our handlers tell us? That the threat is effective and existential. Not! We are not in a beaten zone.

Our leaders fail to recognize, or apprise us, or the true nature of the fire. The al-Qaeda in theatre is a far threat, which does not affect our Homeland concerns. We should focus on the threat that is effective, and that threat is not originating in Yemen, Afghanistan or Iraq, but rather in places we least examine.

Our attention is now being shifted to Yemen in response to the crotch non-bomber, who is instead being packaged a source of effective terrorist fire from that sector. Again, not.

Al-Qaeda in Yemen is not a credible threat to the U.S. Maybe shoe bomber and crotch bomber were merely stooges, straw men allowed to compromise our security barriers to ramp up fear, thereby providing further justification for the endless cycle of fear and violence perpetuated on our side. A reason to carry on the "Security Theater" as Jeffery Goldberg called in "The Things he Carried."

Maybe Yemen fronted crotch bomber Abdulmutallab in a Mouse That Roared scenario. Everyone wants a piece of the American Pie, after all -- get it while it's hot. It is plausible that Yemeni intelligence might have sent Abdulmutallab in an effort to further deplete U.S. coffers via opening a new front on terror, a project Americans seem endlessly on board with.

The incompetent bombers getting through our security are not symbolic of al-Qaeda's prowess but rather the ineffectiveness of our security programs. If not this, then the threat is intentionally being allowed to bypass security.

What should we believe? Either we have total incompetence or a conspiracy, or a combination thereof, none of which is palatable.

Near fire is not far fire, a lost concept on our leaders. If not lost, certainly one which does not service the continuance of our military aggression in those regions.

posted by rangeragainstwar at 3:11 PM

Ranger hits the nail on the head again!

FWIW, my take is simply this --

all these "threats" are managed by national intelligence services...not the least of which is our own.

the eternally unasked question is "how much of these attacks have been provoked by our military adventurism of the last several decades?"

and yes, i agree again with you jim. there are many different kinds of fire.

these guys are real tactical doofuses. but, our leaders are such pansies that there doesn't have to be any success for the smelling salts and fainting couches to be hauled out.

my gawd, if things had been that easy for us in RVN, if all we had to do was to send somebody with a dud bomb and throw the enemy into absolute confusion, panic, and backbiting, it would have been a cakewalk.

shit, most of the commies i fought weren't all that fucking phased by aimed and concentrated fire. there were times after we gassed a tunnel that they came up crying, coughing, and shooting.

MB,
The people you fought probably were not effected by you fire just didn't have the option to by-pass your position.
In that war YOU were the objective.
jim

OTOH, sometimes seemingly meaningless fires can serve a useful purpose. The Soviets used to call it "maskirova", a deception based on showing the enemy what he wanted to see while hiding the real strength the Sovs were planning to use elsewhere.

So - for all that the people the AQ higher uses for wind-dummies are pretty much just that - I think these guys are plenty smart enough about using their tattered assets to keep our eyes off the main effort.

While our nation loses jobs, while the corporatist state takes over, while the political parties are overtaken by mindless careerists whose only interest is re-election (with the caveat that the Dems at least still pretend to care about real issues, while the GOP has gone Galt and is only interested in power for its own sake), we're tossing money at these moronic overseas adventures as if we still had all the time and money in the world. Because a bunch of raggedy-ass Islamic neocons throw a bonehead with a crotch rocket at us every six months or so.

It's like we're proving Heinlein's maxim: "Stupidity cannot be cured with money, or through education, or by legislation. Stupidity is not a sin, the victim can't help being stupid. But stupidity is the only universal capital crime: the sentence is death, there is no appeal, and execution is carried out automatically and without pity."

They are effectively working "The Mouse That Roared" Strategy, ca. 1961.

Lisa: Yes, but if you remember the book and the Sellers movie the idea was to get the Americans to defeat the little country (Zenobia or whatever) and then rebuild it a la the Marshall Plan.

Instead we have two groups with two slightly different if somewhat cunning plans.

On the one hand you have outfits like the "government" of Yemen, who likes the idea of using the oogga-booga AQ bogeymen to get lots of Yankee dollars into their economy as well as Yankee soldiers to kill their enemies for free.

On the other you have the actual AQ, who wants us to do just that so we kill Muslim civilians, prop up these loathesome regimes, and spend lots of Yankee dollars chasing muj rather than building power plants and freeways and sending kids to school to become engineers.

It's the Perfect Storm. To bad we're the fishing boat getting swamped...

"Grand Fenwick" (due east of Afghanistan ?)

Of course, I think those "Yankee dollars" should be "building power plants and freeways and sending kids to school" here in the U.S. I have very strong feelings on the education issue (among others).

College is becoming increasingly beyond the reach of many and overcrowding is a huge problem. Faculty are being cut, and community colleges are becoming ghettoized areas of adjunct slave labor.

FDChief,
I find it humorous to even think that the US has a main effort in AFGH.
I just can't see what this effort happens to look like.
jim