RANGER AGAINST WAR: Life in Absurdistan < 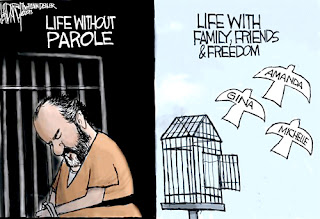 Looking for a lil shorty I noticed
So that I can take home (i can take home)
She can be 18 18 wit a attitude
Or ninteen kinda snotty actin' real rude
But as long as you a thicky thicky thick
--Ride Wit Me, Nelly

It struck me odd to read that one of the Cleveland abductees, Amanda Berry, recently appeared onstage with rapper Nelly, who told her she had "some time to make up" after being held hostage by her abductor Ariel Castro (now serving a 1,000 year prison term.)

Nelly, whose iconic rap video features him running a credit card down a women's rump in a probable objectification of the feminine, sings mostly about being a bad dude and how he scores ass. What promoter would arrange for a traumatized woman to meet with the rapper who sings of cruising for an 18 year old with whom to smoke some "L in the back of a Benzie" after she (Berry) supposedly spent a decade in subjugation and degradation after having herself gotten into a car at age 18 with a man who ...

What sort of a mind fuck is this? Why not just stay in your cage and be a lump of flesh versus being welcomed into Nelly's crib? Of course, gender studies types will blather on about how Ms. Berry is owning her own objectification in her choice of location and person. Perhaps having been out of the loop, Ms. Berry does not even know who Nelly is, making the offense all the more pathetic.

And everyone cheered as the "house of horrors" in a dilapidated Cleveland neighborhood was razed, the event becoming a celebratory spectacle, the onlooker's profound ire directed at the "monster" owner Castro. But no one in the press has had the guts to pan down that street, multiplying that misery by factors unknown, and ask what has been accomplished here. Sister city in misery -- Detroit -- has reported finding scores of dead bodies in ramshackle neighborhoods; surely it is the same in Cleveland.

Art imitating life? Yes, promoters must make a living, too, but does anyone else see the absurdity of this  event?

"But afterwards earth was tainted by impious wickedness

and all fled from justice with eager minds,

the brother’s hand was stained with a brother’s blood,

the child ceased to mourn for its dead parents,

the father chose the a younger son’s death to acquire

a single woman in her prime, the impious mother

spread herself beneath the unknowing son,

not afraid of desecrating the household shrine.

All piety was confused with impiety in evil frenzy

turning the righteous will of the gods from us.

So such as they do not visit our marriages,

nor allow themselves to approach us, in the light of day."

~ Catullus, "Of the Argonauts and an Epithalamium for Peleus and Thetis"

There is nothing new under the sun, my dear. Nothing.

Goes right along with blaming the gun...Destroying the house removed the offender eh.

Human, all too human.

In our dreams, yes. Out of sight, out of mind.