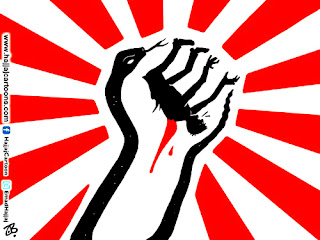 Business is the business of America
--President Calvin Coolidge

"Morality?" The question rings in my head in my best irate and clueless Michael Palin voice. Some are saying aerial bombing of Syria would be "moral", and not bombing would be immoral.

Morality with a Florida flavor came when Florida's Governor Rick Scott cut $1.3 billion dollars from the new education budget, resulting in cuts to programs like art and music, Head Start and after school programs. The same week, on a national level we debate dropping bombs at a $1 million+ a pop over Syria (that's just the cost of the paltry warhead, of course.) Neither action will not make our students smarter or more compassionate citizens.

I propose a morality defined by the uplift and betterment of our citizens. A morality which hews to our Constitution, which is to say a Republic which adheres to our rule of law, if for no other reason than such a nation acts on behalf of enlightened self-interest.

Of course, the program cuts do not affect the lives or families of the decision makers, which is to say, they don't matter. Their children will not suffer the ignobility of being told that things of beauty are not needed for their lives, and that they should get on with the business of a straight-jacketed life in the STEM industries (science, technology, engineering or math), IF you can manage it, and on your dime. If not, service "professions" await you.

Note that while all of this important stuff is going on, you are being distracted by the exploits of Miley, and before that, stories of various women who have killed their husbands, or their kids, or husbands killing wives, etc., or the Ohio three, or Caylee, or Jon Benet, ad nauseum. The news forefronts these salacious tidbits to you, which you then Twitter about, because it is something easy for us to digest, a special little pint of Ben and Jerries called "Bublegum News -- Not."

Since Warren Buffet or Rupert Murdoch will not be going into a Jiffy Mart anytime soon or jogging on streets outside of their gated communities, it is not much matter to them the tragic little stories of Christopher Lane or Joshua Chellow, et. al. Trayvon Martin would not have walked uninvited on their streets, and Mr. Zimmerman would not be guarding them. And further, why would anyone waste an instant on the sad little, all-too-common story of Trayvon Martin's death in a little Florida town? (It was my incredulity over the passion of the predictable knee-jerk reactions and media lynch mob which disgusted me.)

These are economic issues, and not partisan ones; Al Gore could not answer a reporter's question about the price of a gallon of milk, just as George W. Bush did not know the price of a gallon of gas. Other people work for them, discharging the daily minutiae of a life too busy to contend with such trivialities. Their employers operate on another rung of life. Reading the Wall Street Journal is an entirely different matter than reading USA Today, Foreign Policy different than People. The act of reading itself, a different one from viewing.

George Schultz asked in a recent interview hosted by the Commonwealth Club and broadcast on NPR, "How do you govern over diversity in an age of transparency?" It was the query of an overlord asking how to keep the minions in check if they have access to all the news that's not fit to print. Of course, the minions tame themselves, using their connectivity for not much that will benefit them beyond entertainment, which is the goal, of course.

There's not much more to say on peonage so entrenched and embraced, so I'll end with an excerpt from a Charles Pierce essay on the wisdom of interfering in Syria in Esquire:

Make no mistake. If we strike, we will be making actual war in Syria. Ordinary Syrians will not see our missiles as "bomb-o-grams," telling them with every deadly explosion that we're really on their side. We will be another belligerent making their daily lives brutal and deadly, and there will be enough of them to hate us for that to guarantee that we will have to make more war in that place, or in some other place, very soon. That is what we do now. We make war in a place without going to war in a place, and nobody is fooled except ourselves (Making War in Syria.)