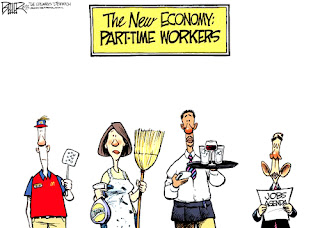 Here in my car
I feel safest of all
I can lock all my doors
It’s the only way to live
In cars
--Cars, Gary Numan

I left that day with a lunch box full of gears
Now, I never considered myself a thief
GM wouldn’t miss just one little piece
Especially if I strung it out over several years
--One Piece at a Time, Johnny Cash

Detroit is dying, yet the news is more content with celebrity or the foreign hordes ... Egypt, Syria, whatever. (Hey -- do you know the meaning beyond Bey's "fierce new do"? The Guardian says "it might be the biggest news of all time." Be there, or be square.)

How did the fourth largest industrial city in America turn into a travesty of the American Dream? A city that helped the Allies win a world war through its prodigious munitions output? Where would the U.S. turn now for this industrial output? Certainly not Cleveland, Erie, Buffalo, Youngstown, Pittsburg, or any of the other former Steel and industrial centers.

The city's grim stats paint a desolate picture: Unemplyment: 15.5%; 1/3 of citizens live in poverty; 82.7% of population is black. 20,000 stray dogs roam the streets (like in Chernobyl). Urban planners suggest corraling the population so as to reduce infrastructure expenses (like COIN's "strategic hamlet"program for third world nations.)

Detroit is being urged to sell its prestigious 60,000-piece art collection -- why not? What need do such people have of things of beauty and value? Such things are the provenance of the wealthy and the winners. Just as the poorer schools lose their art and music programs first, so it goes with losers everywhere.

What does it matter to inner city Detroit that trillions of U.S. tax dollars fly overseas, or that Afghanistan or Iraq are still not viable states? We can bail out banks and auto companies, but how to bail out a city with no tax base or hope for a productive future? How is it that Ford and General Motors have survived, yet the city that spawned them hears its death knell? (I recently saw a KIA with government tags -- what gives?)

In "Crumbling American Dreams", author Putnam suggests the breakdown's roots lie in our loss of identity, both personal and national:

The crumbling of the American dream is a purple problem, obscured by solely red or solely blue lenses. Its economic and cultural roots are entangled, a mixture of government, private sector, community and personal failings. But the deepest root is our radically shriveled sense of “we.”


Epitaph for Detroit: Thy name is globalization. In a cruel twist, BMW, Mercedes, Kia, Hyundai, Toyota and Honda are all setting up factories in the United States -- but not in Detroit. The non-union South is a far more hospitable climate for the profiteering corporation.

You served your purpose, Detroit. No more unions; middle class on the descent -- there is no one left to occupy you.

posted by rangeragainstwar at 6:05 PM

From your linked article:

"Manufacturing employment in Ottawa County plummeted from 55 percent of all jobs in 1965 to 25 percent in 1995 and kept falling. By 2012 the average worker in Ottawa County had not had a real raise for four decades and, in fact, is now paid roughly 16 percent less in inflation-adjusted dollars than his or her grandfather in the early 1970s. The local population fell as P.C.H.S. graduates who could escape increasingly did. Most of the downtown shops of my youth stand empty and derelict, driven out of business by gradually shrinking paychecks and the Walmart on the outskirts of town."

I did two semesters at Wayne State U (right across the street from the DIA). I'd spend my free time wandering around the museum admiring the fine collections and special exhibits. Used to eat lunch in the museum café. What a shame that all of that will either be sold off or left as an unappreciated oasis of civilization in the midst of a waste land.

Re; union and compensation: the problem is not so much greedy corporatists wanting to screw workers out of decent wages. It's more the cost of the pensions that the unions demand. Originally a good thing, the cost of the health care component of the pensions has skyrocketed, couple with the fact that retirees are living longer than when the pension plans were first established. Yes, wages have been stagnant or even declined in real terms, but that is because a negative wage growth had to offset the staggering growth of pension benefits costs.

This is a serious issue that is also facing the socialized versions of same; Medicare and Social Security. The difference is that the private sector has to answer to share holders and has to do something NOW to avert crisis, whereas the gov't can stick its collective head in the sand and hope the crisis doesn't hit (and it will hit) until the next cadre of elected officials is in charge. Responsible business owners versus irresponsible govt is spun as greedy heartless business versus compassionate govt.

The riots of '67 - '68 played a major role in the decline of the city, but we don't like to talk about that because it's a racial issue that paints blacks in a bad light. After the riots there was a mass exodus of productive people from the city. They were scared and for good reason. Years after the riots the idea of an excursion into Detroit took on the ominous aura of a patrol into an enemy held sector of jungle. Productive people looked to safer, friendlier local.s to establish/re-establish their businesses.

Detroit is one of the most salient vestiges of the old America - an America that most of us on this blog were born into. We mourn its passing.

Chief and No 1.
The irony of this charade is that Windsor Canada in visual sight of Detroit is a fast growing , dynamic entity.
Ummh!
What needs to be said is that local, muni /county and state policies have led to this point. let's throw in free trade agreements and we have the new improved America.
Some theorists say that it takes 30 years for a faulty law to play out to it's logical fruition.
This could be a way to describe Detroit.
The point however is larger than Detroit and smaller than America.
This is the future.
jim

Jim, not disagreeing. Maybe being contrary because I like being the devil's advocate, but opposite of what Putnam says has some play here too. Factories have a real economic life span. When they reach the end of that span a decision has to be made; re-build in the same location or move to a location that makes more sense economically. The decision was made, re; Detroit, to re-build elsewhere. It's not that the US no longer produces cars - we do, even if foreign owned - it's that we don't produce them in Detroit any more.

Why? What was it about Detroit that made capital seek other (greener?) pastures?

One aspect is that Detroit assumed that the automotive industry would always stay there because it always had. Detroit had that identity and it took it for granted. That's the negative side of Putnam's ID concept.

One partner in a marriage - let's say a husband - assumes he can do(or not do) whatever he wants because, well, they've been married for so many years and they always be married. Next thing you know, there's a divorce and he is left crying in his his beer and the ex-wife is off enjoying the bright new day with some swinging dick.

So why leave Detroit? I think there are some tangible material reasons that are being overlooked in favor of metaphorical morality plays.

big question: what do you do with 750,000 people living like mad max meets Somalia and costing,conservatively, $15 billion/year to keep alive? FEMA camps?

Nobody wants to bite......ok. The answer to why Detroit declined is that it was met with a perfect storm of union excesses and extreme liberal government policies. When the city began to slide, both unions and liberals doubled down, thus accelerating the slide into complete destruction. Chief asked recently for evidence that liberalism is harming the country. I offer Detroit. Need anything more be said.

In other news - http://www.americanthinker.com/blog/2013/08/feinstein_looks_to_exclude_bloggers_new_media_from_press_shield_law.html?utm_source=twitterfeed&utm_medium=twitter - better watch you say on your blog. Progressive law makers want to get you if you say something that displeases them.