RANGER AGAINST WAR: With A Vengeance < 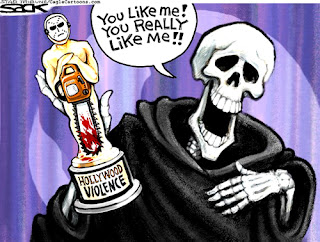 Once a person was asked to step into this brutal century,
anything could happen
--A Confederacy of Dunces,
John Kennedy

Ranger does not quail at the sight of blood, but he stands in awe of the virtual violence dished out in heaping helpings to a ravenous audience apres the terrorist events of  9-11-01.

The Girl With the Dragon Tattoo (or, "Men Who Hate Women") was published posthumously to much acclaim in 2005; it is now the biggest-selling ebook. The eponymous "girl" exacted vengeance via her computer hacking skills. She was Machiavellian and presented as autistic; she did not understand the more gentle human emotions like "love", mistaking it for opportunistic sex.

Popular television series "Golden Boy" features the youngest homicide detective in NYPD history, who gets there by planting evidence which indicts a "bad guy". He has earned adulation and rank by flouting the law, and each episode follows this template of a supposedly conflicted morality: Good guy does illegal things to get bad guys. The problem is, morality is not the issue in the arena of law, which is quite specific.

The ultra-violent series, "The Following" features an FBI agent who is chasing a nasty serial killer. However, the FBI agent killed a person in revenge before his appointment as a federal agent, so again, vengeance is rewarded.

Bad characters mete out bad (unconstitutional) police work, and the viewers find this gratifying and/or acceptable as entertainment.The violence being acted out supersedes anything portrayed in X-rated films of the past, the only possible result in the viewer is exhaustion, or faint relief that the incessant violence has ceased.

Why do we subject ourselves to such visual and aural pain?

These entertainments suggest a moral lassitude among our law enforcement personnel, and an aggrandizement of the Dirty Harry template. In an easy analogy, Presidents G. W. Bush and B. H. Obama are Golden Boys, and our entertainment inures and acclimates us to accept the supposed ubiquity of the transgressive behavior.


[addendum: We, like everyone else, are long on grievances but short on solutions. A reader sent the following effort from the site, "Free Man's Perspective,  "How to Fix Detroit in Six Easy Steps". ed.]

posted by rangeragainstwar at 3:54 PM