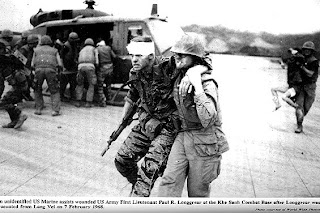 February 6 was the 42 anniversary of the Battle of Lang Vei fought by members of the 5th Special Forces Group in the Republic of Vietnam.

Ranger's associate Paul Longgrear is the last surviving officer from that battle, but Paul and Ranger have divergent views on the validity of current actions of the U.S. Army. Ranger alone will analogize this action to several from the current wars in Iraq and Afghanistan.

Ranger emphasizes that nothing he says is a criticism of any Special Forces soldier or their leadership. They fought beyond human comprehension; the Corps and Theatre Commanders are left holding the bag on this one.

These questions haunt the military mind, and are not confined to this lonely and desperate fight for survival. In all of these scenarios, U.S. forces are thrown onto a piece of terrain and told their mission is essential, and that they will attack and secure the locale, or they will defend the terrain, but the rationale for doing so is never clearly thought out.

The soldiers fighting are at the bottom of the food chain. The Corps Commander is the person that bears all responsibility, closely followed by the Theatre Commander. Ranger doubts that the Corps concept even functions in Afghanistan.

The chain of command appears to be Theatre directly down to Platoon Leader, with little thought given to the concept of the operation. To a large extent, Afghanistan resembles the Vietnam War in that too much responsibility is shouldered by Platoon Leaders.

Instead, these functions fell to Captain Willoughby, the Camp Commander. They should not have, He should have been leading the camp's defenses, not coordinating supporting defensive fire.

For some inexplicable reason, this was not done.

Ranger was never Mike Force or A Team, but stands in awe of their professionalism and dedication. However, this admiration is always mixed with dismay at the misuse of these assets by Theatre and Corps Commanders and planners. Longgrear's Mike Force was expected to hold terrain that a USMC line battalion would have found difficult to achieve.

These fights devolved to young Lieutenants and Captains. My impression is that all actions above Captain-level were disjointed and reactive in nature. There were no in-place Corps scenarios to reinforce or evacuate Lang Vei in an organized military manner. All reactions above camp level seemed ad hoc.

Lang Vei, Waygul, Wanat and Roberts Ridge share many characteristics. The U.S. engaged forces were given unrealistic and unattainable missions lacking adequate resources. The fights could not be reinforced in a timely manner and the weight of the events fell upon LT's and CPT's. Units were committed piecemeal and placed in positions which the enemy could defeat in detail, with impunity. None were formulas for success.

Lang Vei was a classic battle, and though what we have seen in Afghanistan is not of the same scale, the concept is the same. The unanswered questions pertain to sustainability, reinforcement, reserves, mutual support and weighting the assets of the assigned units emplaced in positions making them vulnerable targets for enemy exploitation.

Since writing this piece, Ranger has come across a vital chapter in the book Last Stand at Khe Sanh (2014) by Gregg Jones which expounds upon the Battle for Lang Vei. This book provides a valuable addition to the student of the Lang Vei fight - jh.

posted by rangeragainstwar at 8:30 PM

one can only hope that somewhere, somebody is asking these questions.

or are they content to simply "honor our warriors" after sending them to stupid snd senseless deaths...

As for the current mess in SW Asia...well, you know nobody's going to question. Salute smartly, move out, draw fire. SSDD.

We never fuckin' learn, do we?

the flag of south vietnam flutter in the breeze looks like some kind of electrical banana or something....

Wilkins released a new memorandum to everyone nearby NAACP models forewarning of which "organized models in the NAACP have zero authority" to help engage in your Vietnam War locale construction of Underrepresented Folks arranged regarding Wa, DC inside June, 1965, in which the primary intention item seemed to be a new showing to help are at odds of You. Azines. coverage inside Vietnam. Read more: http://mordo-crosswords-solution.blogspot.com/2014/07/vietnam-war-locale.html