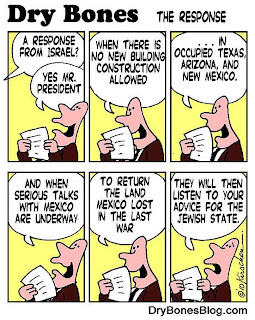 I wanna feel what love is
I know you can show me
--I Want to Know What Love Is,
Foreigner
_________________
The U.S. is fiddle-farting around slap dab in the middle of the Israeli-Palestinian flap for the thousandth time, and to what avail?

The only outcome of any meaning that can realistically be expected is for Secretary of State Hillary Rodham Clinton to get a lifetime achievement Peace Prize for U.S. Meddling. The chances of the U.S. brokering a peace deal = the chances of the U.S. winning a COIN scenario: it will not happen in this time-space dimension.

Counterinsurgency, like the Israeli question, presents an insoluble dilemma. U.S. foreign policy presumes a democratic Israel (or Iraq or Afghanistan) will be a beacon to the Arab world, serving as liberalizing example for all regional players. The same thinking infects our slavering over Pakistan, Somalia, et. al. But this presumption is based upon a faulty construction of democracy and human behavior.

Democracy is an impulse that emerges at the grassroots, moving upwards. It does not trickle down. It is spontaneous and supported by an educated, healthy and wealthy middle class with a liberal philosophy.

As with a brick wall or skyscraper, there must be a firm foundation on which it can reside, or the structure will crumble, like Ozymandius's statue. The fact that Israel is a liberal democracy is meaningless. The state was created by outsiders, and will always lack Arab legitimacy.

The fact that Iraq has elections does not make it democratic, as they were imposed by exterior powers. An election does not imply right or legitimacy, especially not when the state is violating other democratic values. Elections are not the basis of a democracy, which is a thing contingent upon a cohesive liberal national philosophy.

Democracy is not a universal goal, and for the U.S. to declare otherwise is the basis of the problem. Maintaining a democracy within U.S. borders is the sworn duty of our leaders, but this is not a worldwide commitment. Moreover, the assumption that achieving democracy in the Middle East or anywhere else will benefit The U.S. is unfounded, even if it were achievable.

It is a faulty construction to think America should democratize the world. This is a longer shot than winning the Florida Lottery.

posted by rangeragainstwar at 10:57 PM

just because it's doomed is no reason to not try diplomacy.

i'm of divided mind regarding israel. i deplore and detest a great deal of their policy, and their methods. i know in my soul that had i been born a palestinian i would be a bomb making and tossing son of a bitch. although, i would hope i wouldn't be the blow myself up with the bomb type. i like longer fights.

still, given the history of the world, a safe haven for jews is under the heading of "not too much to fucking ask."

the creation of israel was sloppy and was dictated by powers outside the region, then the country was settled by folks from outside the region with little or no regard to the folks already there other than to say "get the fuck out yo."

the indian in me hates that kind of a story.

A couple of things I consider in the Israel/Palistinian conflict;

So the Jews have been fucked over, what now gives them the right to do the same to some other people? Democracy? Palistinian citizens of Israel don't even really have the right to vote. Take a look at the methods by which their lands were usurped by jews. Makes me think of glass beads and forked tongues.

Lots of peoples have been genocided and robbed en mass. Of these, only the jews have anything like Israel and US military support given to them as compensation. The only reason is that they have big mouths and big bank accounts and the supposed site of jesus' return; all of which influence US policy makers.

The US won't even cause the Turks to do so little as admit to what they did to the Armenians (proportionally equal to Armenians as Hitler's final solution was to Jews), let alone provide some form of protection or compensation.

American Indians get, at best, some land (where there are very few good jobs) and a govt check just big enough to buy a pickup and a singlewide and maybe a little left over to make like a camel late on a saturday night.

Africans get to just plain die. Ditto various tribes in SE Asia and in Latin America.

I think that it's not too fucking much to ask that if we are going to ensure a prosperous safe haven to a chosen few out of the many wronged and displaced, then the recipients behave like they recognize they are a special case; which to my mind means humility and gratitude and not creating misery for their neighbors and benefactors.

That's just my weird idea, though.

I agree with you -- that sliver of desert is not too much to fucking ask.

When the State of Israel was created, the Palestinians were offered 50%; they had no honest broker to advocate for them at the UN, as they still do not.

I find your comment re. "jews" -- "they have big mouths and big bank accounts" -- repugnant, damaging, and uninformed.

Hateful, in fact, and diametrically opposed to liberal thinking.

U.S.S. Liberty
Google it if you don't know.

Lisa, I certainly did not mean to offend you. I regret that I did. I could have - and probably should have - worded my comments re; the zionist lobby, in some more pc terms.

May I offer this revision of the offending section of my previous comment:

AIPAC is one of the most wealthy and influencial lobbies in Washington. Some key members and/or contributers to AIPAC and its subsidiary and satellite groups are major players in the US media infrastructure. No other ethnic/cultural group that has experienced genocide and/or other catastrophic social injustice at the hands of another ethnic/cultural group has such a lobby. No other deserving ethnic/cultural group has received unconditional US support of anything even approaching the scale and scope that Israel has. Some stupid jar head think there is a correlation between the zionist lobby's money, media connections and the preferential treatment Israel receives despite the decidedly non-liberal way that Israel treats its own [non-Jewish] citizens and neighbors.

Incidently, the DOJ has recently moved to have AIPAC register as a foreign agent.

This topic always causes turmoil between otherwise friendly people. I would vow to never discuss it again, but then I feel like I've surrendered to someone's artifice.

That is a more p.c. way to word it, but as I've told others, you don't regret what you said, but that is was overheard by one who took offense.

Please speak your mind freely, here, as will I.

Even Jim will admit, I never wield the art of artifice. I'm much too blunt for that.

avedis,
I usually ignore the Isreali issur b/c it's too hot button and has nothing to do with the PWOT, which is my focus. Mostly.
I did this art.b/c the two issues share similarities that deserved comment.
Surely as MB says diplomacy is always an option,see how well it worked for Geronimo!
Diplomacy usually means some one is getting screwed from the back rather than a stand up frontal screwing.
We need to can the hypocrisy of the entire situation-we want them to declare peace ,but we wage war with relish.
jim

JIm,
I don't totally agree with that the Israel situation has nothing to do with the PWOT. In fact, it might have a tremendous amount to do with it.

A good synopsis is by Walt and Mearshiemer.

Avedis,
The PWOT has more to do with OIL than it does Israel.
imho.
jim

My sense - and there's am[ple evidence to support it - is that the zionist lobby has allied itself with the oil lobby. In come cases they are one and the same. There are overlapping command and control structures; some key players work for both interest groups.

BTW, The zionist lobby is not just jewish. It is also fundementalist christian.

"In its current form Zionism seeks to dominate all of Palestine and the Middle East by means of violence and the threat of violence (using weapons manufactured and purchased with billions of dollars of "aid" supplied by the United States at taxpayer expense) and to maximize its influence in world affairs and in world history, principally by means of control of the government of the USA (primarily by blackmailing its many corrupt politicians), at the expense of the social wellbeing not only of the Palestinians but of the peoples of all lands."
http://www.serendipity.li/zionism.htm

The United States is a far safer haven for Jewish people than Israel ever will be... we've got Canada and Mexico for neighbors rather than Syria, Jordan, et al...we should pack the whole place up and everyone who wants to come and move it and them here. End of the mayhem.. oh, almost forgot about the magic rocks that people want to kill for and die over. Since so many people set such store in controlling the magic rocks that God likes better than any other rocks I guess the situation shall carry on. Very sad.

I think Israelis would be quite happy to live as they did in the 50 and early 60's, with reciprocity with the Palestinians, before the mad radical elements emerged, intent on denying any possibility of coexistence.