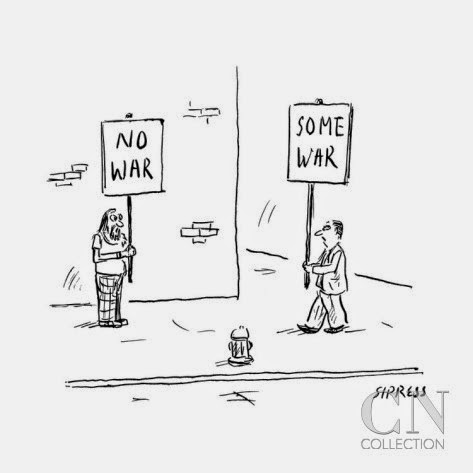 Every action has an equal and opposite reaction
--Newton's Third Law

The reaction to the precipitating event is
not always proportional
--Ranger's Corollary to the Third Law
______________________
Soldiers of all people should understand cause and effect since our actions have exceptional significance for the welfare of the nation they serve.

When reflecting on the punishing Battle of Fallujah (payback for the murder of several United States contract personnel) it seems clear that in this action lies the genesis of the terror army calling itself Islamic State/ISIS, a group now laying waste to much of Iraq.

It's not exactly rocket science, but no one wants to admit it, either. Things do not occur in a vacuum, and to every action there is a counteraction. Much as Hamas grew out of the early the PLFP, so IS finds its provenance amidst the violence preceding its formation, its affiliation a badge of pride for its members, vile though their brutality may seem to others.

Fallujah was a battle of little importance. The Sunni resistance could not be destroyed, like the city could be. Cities may be turned into rubble by superior firepower, but what is achieved in the aftermath?

Call the destruction "nation-building" and claim you are fighting for hearts and minds, but the proof is in the pudding. Iraq and next Afghanistan (probably) will prove dismal failures for the workers of hearts and minds via war. You may pull the shroud over your eyes and say you act in the name of rectitude, but the recipient of your self-interested largess will feel the hit for what it is (and not what is it intended, or constructed, to be.)

The coalition assault unleashed a fury which created terror ("Shock and Awe"), and so the terror continues to spool out in a predictable and logical fashion. Pride demands it.

After Fallujah, the Sunni population did the only logical thing: they took their beating, consolidated, reorganized, trained and recruited in a readily accessible safe haven, awaiting their day in the sun.

The once-Golden Boy of The Surge -- General David Petraeus -- made his name on implementing Counterinsurgency (COIN) in a modern environment. But he also knew his unknown unknowns. "Tell me how this ends?" he quizzically asked any who would listen.

It was not reassuring then, and it is less so, now.

posted by rangeragainstwar at 4:00 PM 5 comments 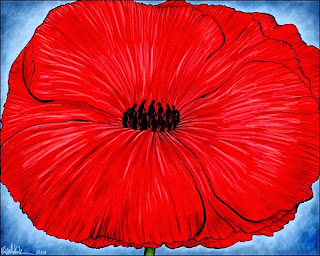 Holding back the years
Thinking of the fear I've had for so long
When somebody hears
Listen to the fear that's gone
--Holding Back the Years,
Simply Red

your slightest look easily will unclose me
though i have closed myself as fingers,
you open always petal by petal myself as Spring opens
(touching skilfully,mysteriously) her first rose
--Somewhere I Have Never Travelled,
Gladly Beyond,
e.e. cummings
_______________________


A river or a stream is no longer a place to fill a canteen, nor is it a danger area.

A river line is no longer a unit boundary.

A road is no longer an avenue of approach, nor is it a "main supply route" (MSR).

A ditch is no longer cover, and a shrub is not concealment.

A dip in thr ground is no longer "dead space".

A hill is no longer "key terrain", or an objective to be secured, nor is a tree line.

A wooded area is no longer an "objective rally point" (ORP).

An open field is no longer a "landing zone" (LZ).

A clicking sound is no longer a spoon activating a grenade.

A "click" is no longer an endless ordeal or agony.

Night time is no longer ruled by an enemy.

A rifle is no longer an appendage to your body.

Tracers, trip flares, Willy Pete and star clusters are not the only colorful things in your life.

A road junction is no longer a registration point.

A poncho hootch is no longer home, and a rucksack does not permanently attach to your back.

Your eyes no longer see in degrees and mils and thunder no longer sounds like danger.

Mail call is no longer a time of loneliness and sadness.

A helmet is no longer a pillow.

Labels: poem about leaving the things we carried behind, veteran's day 2014

posted by rangeragainstwar at 7:15 PM 2 comments

And what was all that shit about Vietnam?
What the FUCK, has anything got to do with Vietnam?
--The Big Lebowski (1998)


Behold, the SOG Ninja Tactical Backpack, replete with MOLLE loops and the iconic SOG death's head crest -- yours for a mere $29.97, constructed by the peons of your faithful Chinese overlords, to be found at a Walmart SuperCenter near you.

In Ranger's war, "SOG" stood for Studies and Observations Group, a euphamistically-named highly-classified operation that operated in denied areas of Vietnam and other parts of Southeast Asia during that generation's most excellent adventure. Today, if you had more pressing things to do during Vietnam (like former VP Cheney claimed) or your main battle experience consists of marathon sessions at the computer screen playing World of Warcraft, not to worry. If you need to stow your gear in a quasi-hipster mode, the SOG Tac Backpack might be for you.

America's conflicted relationship with the Vietnam veteran has played out daily since that event. A short piece in the 31 July 2006 New Yorker, "The Ambien Cookbook", gives a taste of the uncomfortably irreverent-and-disrespectful line that many Vietnam vet depictions walk:

After 2-3 hours, awaken half-submerged in a rice paddy in the jungle lowlands just north of the Mekong Delta.

Back “in country.” You know you’re going to Heaven, ’cause you’ve spent your time in Hell. But here you are once again—back in the Shit. Stay still, stay quiet—as quiet as a mouse. You are asleep, but all of your senses are alert.

Spot V.C. sapper no more than one foot away, playing possum in spider hole beneath duvet-cover camouflage.

Silently stalk stationary V.C.; two can play this game, no? When you gain tactical advantage, corner V.C. and remove ear(s).

Go to kitchen, put ear(s) into pot of water on stove, tie on souvenir lobster bib from Cape Cod trip last summer, sit down at kitchen table with knife in one hand and fork in the other, saying “Fee, fi, fo, fum” over and over—until water boils, or you wake up in police custody despite now earless wife or girlfriend’s protestations of your innocence as delivered to police detective in emergency room, where she now is (whichever comes first).♦

The local Florida State University Museum of Fine Arts is currently hosting a "Vietnam Retrospective" display. The card for the exhibit says, "Veterans of the Vietnam War from throughout the region contributed their photos and memorabilia for this touching exhibit." The 10-piece installation of mostly generic material from the media was housed in a small room; included was a helmet and helmet cover from the 1980's. 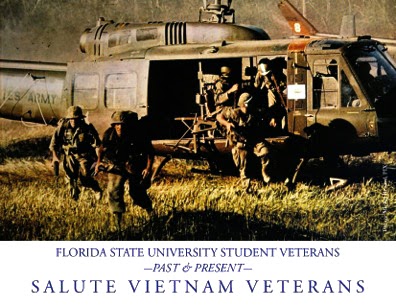 When we inquired who curated the exhibit, we were told, "It was a labor of love," and the sponsors did not wish to have their contact info given out. The implication being that the installation hardly merited a vetting by the Military Sciences, History or Political Science Departments, a poor way to run what aspires to be a world-class college museum.

We thought: if the curators had spent an hour in the waiting room of the local VA Outpatient clinic, they could have filled several exhibition rooms with personal memorabilia. The paucity of materials in the needlessly empty white space gave the impression that the veterans of that war no longer had much of a presence.

The fact is quite to the contrary, especially if one takes a toll of the nation's psyche (to borrow a phrase from former President George W. Bush.) 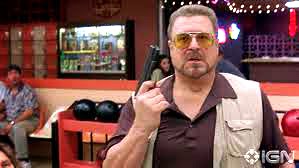 Three gross views of the Vietnam veteran have emerged since that conflict.

First is the crazy and angry man, personified by the egomaniacal Colonel Kurtz in Apocalypse Now andThe Big Lebowski's Walter Sobchek  (a man so annoying at times that even The Dude cannot abide him.) Next is the penitent, bearing the cross for a nation upon his aggrieved soul. Finally, the vet who resembles Us, tenuously existing somewhere in between -- not fully reintegrated into society, not quite trusted. He is the fallen angel, representing a cynical society which has lost faith with its leadership.

The Vietnam veteran was triply-betrayed. Sent to fight an unwinable war, he was not only abandoned by his civilian fellows (who claimed to protest for his safe return) but also by the institution he served. The severe military Reduction in Forces (RIF's) immediately following the cessation of U.S. involvement in Vietnam gave lie to the idea that we celebrate our soldier's sacrifices, as many careers were nipped in the bud.

A nation's naivete and disgust was projected upon him, an unspeakable and irremediable offense to a young mind. He was denied the accolades of his fathers and uncles not because he failed in his duty, but by dint of being born into a society undergoing a total involution. He ain't no fortunate son in so many senses of the phrase.

If our national spirit has waned in the intervening decades, it may be due in part to the presence of 100's of thousands of that conflict's walking wounded in body and mind in its midst. While cases of shell-shock and battle fatigue from former wars walk side by side with the VN veteran, they were the exception to the rule of their respective engagements.

The ebullient celebration with which the WWII vet was feted was absent from most VN homecomings. First came the brazen antagonism towards the "baby-killers", then the awkwardness and ennui when the damage and shame was recognized. The Vietnam vet found himself in a no-win, no-man's land in his home country.

The "Ambien" piece is an example of the shaky terrain in which we still place the Vietnam veteran. While he occupies the same physical zone as the rest of us, he is potentially combustible. In this case, the sleep drug Ambien awakens him to the technicolor madness of his long-recessed memories.

This is the representation of the zombie vet, revivified in his and our nightmares, exposed to toxins like Agent Orange -- a gift that keeps on giving. Every few years a new malady is adjudicated to be service-connected for VN vets exposed to the toxic defoliant.

So the tiny installation, not even correct -- the labor of love underwritten by a major university benefactor -- did not even have its own opening night ceremony. When asked, a museum representative said that we could attend the ceremony for the Renaissance bird exhibition in a concurrent display.  It would be almost the same thing.

The price of heroism gets a little cheaper every day.

--by Jim and Lisa

posted by rangeragainstwar at 2:20 PM 5 comments