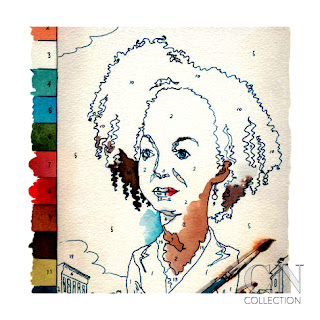 As specialists of apparent life,
stars serve as superficial objects
that people can identify with in order to
compensate for the
fragmented productive specializations
that they actually live
--Society of the Spectacle,
Guy Debord

Well now home entertainment was my baby's wish
So I hopped into town for a satellite dish
I tied it to the top of my Japanese car
I came home and I pointed it out into the stars
--57 Channels (And Nuthin' On),
Bruce Springsteen

While Ms. Dolezal's choice to be black might make for an interesting study in Post Modern Culture or perhaps some journal on psychopathology, it is not national news. No moreso than if a woman with black genetics passed as white. Ditto the former Bruce Jenner's gender reassignment surgery and all of the other bosh which fills out the so-called news programming, the pseudo-news.

It fills someone's agenda of anger and outrage keeping the issues of blackness and transgenderedness on the front of the tabloids and news, which are indistinguishable today.

The television news always leads with a shocking event, the tragic or the sensational. On a dog day that might have to be a tornado in Kansas which does not affect the other 49 states (it is called "Tornado Alley" for a reason.) And while these sorts of things might credibly open a local news program, they have no place being featured on the national news

Yet that is where they now perch, front and center.

All programs could be called "Entertainment Tonight" today, all created to gain your rapt gaze, to fix you and satisfy you as a mute voyeur. There is no need for you to cogitate or communicate what you have viewed as it is all masticated and predigested for you. Fast food for your brain.

One might wonder if there is anything beyond bread and circuses which motivates programing today. Rather than being motivated by exaltation at the inspiring, we are daily dragged through the muck in the media -- the ugliest places that policemen, doctors and social workers are paid to navigate.

In its early days t.v. featured playhouse events and straight news. Commentary was labeled as such. Broadcasting was not 24/7, and it's goal was not to lull the viewer into an insouciant dullness but to provide something provocative and substantive.

But it was not long before game shows and soap operas found their niche, and the hopes for a high-minded educational medium soon faded.

Today we have so much more connectivity than that provided by a few network stations, but our skills at living a good life alongside our media  masters have not increased. The majority of our days are spent in feverish communications via our electronic devices, but what exactly are we accomplishing?

With the new threat of death-by-lifestyle (=sitting while glued to our devices), so much for "better living through science".

As Science magazine reported, in causes of death, "infectious disease has been eclipsed by long-term chronic disease, closely followed by humans themselves." While man's ability to develop technology continues apace, his ability to digest it is limited. As Martin Luther King, Jr. said of our military capabilities, we have guided missiles but misguided men. 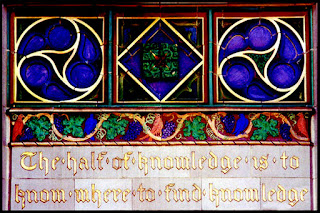 A frieze over the entrance to the first library at FSU (Dodd Hall) states,"The half of knowledge is knowing where to find knowledge". Until the last couple of decades that was true. One would scour the card catalogs and microfiche and conduct one's own "meta studies" to verify a thesis which one wished to investigate. Finding knowledge was a skill.

However, the "half" which was NOT knowing where to find it was taken care of. People thought about things. Without having to escape to an ashram, they somehow found the time to think and to determine meet concerns and what constituted rightness for themselves.

Now knowledge is a blitz. We have immediate access to a torrent of info from any place, but we do not know how to ask the questions. We lack for the "What" or the "Why"? The implications of this in our media-saturated world is, we don't know how to live.

We have continual media feeds from every source to which we subscribe, but it seems that the rate of flow of data has taken precedence over our ability to enlist our own discretion. There is no time for careful mulling over of the fitness of the question or of the answers. What has taken its place is a mute miasma of data scrolling through our lives on an unceasing dumb feed. Like lava erupting from a volcano, there is no way stop it.


In the meantime, while we are amusing ourselves to death, actual issues are marching across the nation's stage:

-- salmon and trout are facing a die off in Oregon due to unprecedented drought.

-- accessible solar technology is ignored (Power to the People)


In central Florida, Lake Apopka and its Chain of Lakes --what was once a renowned bass fishing resort -- now has transgendered fish and frogs, by no choice of their own (unlike former decathelete Ms. Jenner.) Their plight is due to decades of toxic runoff from the muck farming in the rich soil surrounding the lake.

That's the merest beginning of actual issues which might occupy our thought ... were the Marching Morons to halt and do an about face before their next video game session.

A Good Show from the Bully Pulpit: Charleston II

Come fly with me, let's float down to Peru
In llama-land there's a one-man band
And he'll toot his flute for you
--Come Fly with Me,
Frank Sinatra


Certainly, it was good for animating the black vote if not a little disingenuous, summoning as it did his beloved-but-thrown-under-the-bus Reverend Wright's call-and-response cadence.

Why did the President show up at a church service for the nine victims of the shooting at Emanuel AME church? Surely there have been other more spectacular spree killings during his term, yet he was not a presence at those locations. As with the Democratic contingent present at Michael Brown's funeral, this event is being used to advance a racial agenda.

Such preferential attention shows favoritism not befitting a United State's President. While all murders are lamentable, they should not be exploited to further an agenda. One expects Jesse Jackson, Al Sharpton and the crew of regulars to take the photo op while mouthing their incendiary rhetoric, but the President should front a rational and non-partisan position.

If the President will not sing Amazing Grace at a soldier's funeral, then why at a civilian's? Four thousand + soldiers have been killed in our Phony War on Terror (PWOT ©), so if the loss of good people for no forseeable reason so destabilizes him that he must sing a public spiritual, surely he could have made one token appearance for his fallen soldiers as Commmander-in Chief.


So when did Presidency-as-performance art begin?

One could say a (perhaps) intentional pandering to the masses began with President Lyndon Johnson's showing of his gall bladder surgery scars and infamous bathroom phone dispatches, or his lifting of his beagle, Him, by its ears. Though somewhat vulgar, Johnson was a cunning man, and what is the Latin root of "vulgar" but the common man.

For that section of America which he was brought on the Kennedy presidential ticket to woo, the non-Nantucket contingent, Johnson was the common man and scored points on the "realness" scale with these actions.

Next. President Nixon always groomed his underdog image ("You won't have Nixon to kick around anymore"), though this was probably more a statement of fact than of cultivation.

President Reagan was in fact an actor. Fantasy collided with reality in his very facticity, and there is little more to say. But his election was a watershed moment in manifesting Guy Debord's Society of the Spectacle.

It was then but a small jump to candidate Clinton's saxophone playing on the Arsenio Hall Show, and Obama's MySpace, Facebook and Twitter accounts and attempts to be Old School (EWF, Bob Dylan), New School (Jay-Z; Ludacris) by telling the nation what he has on his iPod, to be both black, white and everything in between.

As President Lincoln once said, you can't please all of the people all of the time. Though a politician is always mindful of pulling in as many special interests as possible, Mr. Obama's crooning pandering at the Emanuel AME church was a spectacular new low.

posted by rangeragainstwar at 4:13 PM 1 comments 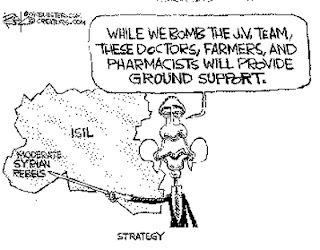 
In another Wag the Dog moment not to be unexploited, President Obama plied his pipes last Friday at the Emanuel AME church in Charleston, SC, the site of the killings of nine black parishioners.

While the killing was surely a hate crime, against which we have legislation, it was not a massacre as the hyperbolic press is wont to label it. Massacres involve groups acting in symbolic ways. Instead, this was the deranged act of a pathetic, rootless individual.

The President performed a call and response near the end of his oratory: “Clementa Pinckney found that grace,” repeating the phrase after each victim's name. No, they did not find grace but were rather murdered in a deluded individual's vulgar and tawdry attempt at self-glorification. In a self-contradiction, Obama later said, "In the Christian tradition, grace is not earned."

Perhaps more horrifying than the actual killing is the fact that twelve years into the war on terror, none of our military or intelligence was able to predict or deter this event. This was neither an act of terrorism nor of home-grown or sleeper cells of terrorists. This was simply an act of good old-fashioned American hatred. It is a hate crime -- nothing but.

Mr. Obama may fly down in Air Force 1 and interpose himself in a show of force, but he was and is powerless to predict or stop such acts. He may order drone strikes world wide, but they do not make us any safer from terrorists, criminals, or crazy, crusading idiots.

People like the shooter give off little of a predictive nature. When they do, it is often within the confines of their little crazy worlds, often lived in the bubble of innumerable virtual chat rooms, and thought crime is not yet prosecutable.

Hatred is the glue that holds the world together. Even for those who claim fealty to a religion, it is a hard row to hoe to "love thy neighbor" (= The Other) when your religion -- any religion -- gains its legitimacy by virtue of cleaving from every other. This is by definition, and a built-in failure of most dogma.

You are you, by virtue of not being THEM, and the "them" is an excoriated unknown, condemned by your creator to a life of everlasting torment in the hereafter, at best.

Meanwhile, when the Charleston story was claiming the spotlight, heinous and murderous violence continued apace throughout the world. Hatred and opposable thumbs (to create and carry weapons) may be the defining feature of the hominids -- not a great legacy.

To refashion the lyrics of songwriter George Gershwin, "In time the Rockies may crumble / Gibralter may tumble / There're only made of clay / But ..." hatred is here to stay. Our biracial President trying to get his groove on singing a negro spiritual will not alter the fact.

Then the leaders of that same government cry crocodile tears when the violence is visited on the home team.
It is a predictable and sad story, and the "sad" is a double entendre.

posted by rangeragainstwar at 7:01 AM 1 comments