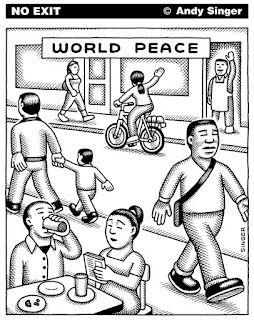 And I'm proud to be an American
Where at least I know I'm free
--God Bless the U.S.A.,
Lee Greenwood

There ain't no good guy, there ain't no bad guy
There's only you and me and we just disagree
--We Just Disagree,
Dave Mason

We ended SITREP I saying that wars were based on objective facts which underlie and precede the action.

In contrast, the War on Terror (WOT) is based primarily upon false assumptions and cruel cynicism. Prior to the initiation of the WOT proper in 2002, we had the Iraqi - Kuwaiti event known as Gulf War I, named as though to lend the WOT a provenance which then-President George H. W. Bush's Most Excellent oil adventure most certainly had not.

Saddam Hussein was kicked out of Kuwait, but it was not a strategic victory for the United States. The U.S. gained nothing beyond a show of power politics. Kuwait was never liberated and will never be a democratic society.

Of course, neither will be Iraq, Afghanistan or Libya, but many have yet to see the failure as they do not have the benefit of an end date which would allow a perspective to see the failure that is. (The Marines returned to Helmand Provence this year, and so it goes.)

The U.S. has precision weapons and artillery and mortars with GPS fuses, but we cannot fix the enemy. We cannot even define the enemy. Is he "militant", "insurgent", "terrorist", "militia"? Is he an amorphous and fungible pool of "Bad Guys"?

It is a poor way to conduct a war.

If we cannot define the Bad Guys, then how do we identify the Good Guys? He is a squidgy enemy on a non-linear battlefield.

The U.S. and battle buddies (do we still have them?) can kick the baddies out or kill them, but that does not cut their main supply and support routes which are remote from the battlefield.

Clearly, the battlefield has never been isolated in the WOT. The best that can be achieved is local tactical security. There has been no strategic thought or action in the WOT because this is not a war.

If this was a war, we would have allies that were not disingenuous and duplicitous.

Neither Iraq, nor Afghanistan, Libya, Saudi Arabia or any other country in the mix share our values or our goals, either military or political. Our NATO ally Turkey is at odds with our policy regarding the Kurds whom we support, though they have no value to the U.S. as allies.

We have no friends in the region and our actions are at cross-purposes to our interests. There are no moderates in any of the regional equations.

So, if there is no war to be won and no chance of political accommodation, then what is it that we hope to achieve in the region?

Remind me: why are we back in Afghanistan?

posted by rangeragainstwar at 5:26 PM 8 comments 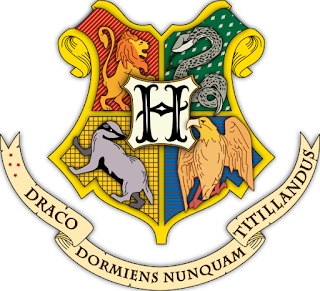 Hope is a good breakfast but a bad supper
--William Rawley

America is like Disney World's Magic Kingdom. We have left Frontierland and Liberty Square, now residing squarely in Fantasyland. We live as though Harry Potter is real. We receive our tutelage at Hogworts (aka The Media News).

We believe in entertainment and alternate realities; we are saturated in it. In fact, we are so estranged from the daily requirements of life that we -- to include our leaders -- cannot define what our national health should look like. Much like "the leadership" stood agog before the dipping barometer in advance of 2005's devastating Category 5 storm Katrina, we see the wreckage ... we CREATE the wreckage ... yet the lack the ability to pull up the brakes, or to take another track.

Leaders which are primarily self-serving lack the ability to lead others. Our national policies are largely self-destructive, despite the inclusion of words like "care" and "defense". The rubes in the despised flyover states considered good by the these politicians only for the fodder of their party vote and photo ops have shown that they know the gig is up.

The day of the true Statesman is gone. The People now know that neither the Right nor the Left will improve their lots or protect them from their too-often dismal lives. "Hope" is the provenance of them that has, or at least, those that have access to mentors and tutelage, goods not often seen in the downward cycling hinterlands or the decayed inner cities.

Like almost all revolutions, we forged a nation in fire and blood. Liberal thought and action was played out on the field of battle.

Revolutions are not conservative events; the U.S. Revolution was no exception. All that is great about our nation sprang from liberal concepts. Sadly, for too many today, to be a liberal is an exclusionary thing.

Hypocritically, liberalism has become perverted to denote a creed sanctioning all behaviors, while concomitantly ostracizing those deemed not "liberal" enough. We have betrayed the great competition of ideas we once had between the Madisons and the Jeffersonians.

We use tinny words like "progressive" to describe thought and action which should rightly be called "liberal" but which we know is a term which has passed its "use by" date.

Politics has become an ego project. One is either enveloped in the "aren't we cool" fold of rube-baiting, or one is a rube. (Pick your side of the fence, and you will be facing the Other.)

There is a third group, however, and its members disdain the absurd theatre. It is remotely possible that our salvation may be there.

The military realm should be logical and linear, but that is not serving us well today, for the events that we call war are neither logical nor linear. The old paradigms do not plug into the new chaos.

Since our assumptions are illogical, our tactics and strategies cannot succeed. As said previously (Symbolic Targets), we fail because we insist on calling counter-terrorism "warfare". Nothing done militarily since 2003 has been warfare.

What is HAS been is the use of military might in an attempted suppression of an idea. Ideas are not defeated with either drones or foot soldiers.

Wars are opposing nation-states pitting their armies against one another with realistic military and political goals as their drivers.  Wars are based upon objective facts.

posted by rangeragainstwar at 3:00 PM 9 comments 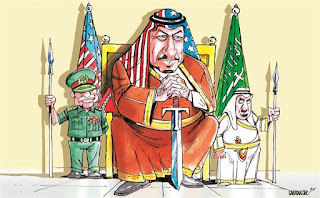 [Note:  Ranger will be returning to his military roots this week. While Lisa had a lot of presence in posts over the past several years, she will now pull back to the role of copy editor. Readers may note the lack of gussying up. (But if you liked Rangerette's frilly-Kevlar style, you will still see it in her posts.) The writer will always be identified in the vanishingly-light tagline at the article's end. -- the editrix.]

The key point of terrorist activity is that their targets are soft and symbolic. That is why the craven activity of running down pedestrians with a van should not be surprising.

This clearly indicates that terrorism is NOT warfare because softness and symbolism does not designate legitimate military targets. When applying a military yardstick to terrorism we lull ourselves into a false sense of security, i.e., we will be protected by a powerful military that knows how to fight it.

Simple logic dispels that notion. Ask yourself: "How many al Qaeda No. 2's has the United States killed since starting its Non-War of Terror? Did any of those drone kills produce security here in the States?

If we think symbolic targets are not cricket for the use of terrorists, then why does the U.S. use them? Assassinating Osama bin Laden in his bedroom is a good example.

If OBL had been killed at the Battle of Tora Bora, that would have been legitimate as he would not have been a symbolic target, just another hostile on the battlefield. However, escaping death he moved on to sanctuary in Pakistan. (Good jihadists don't really get 72 virgins, but rather safe haven in Pakistan, the original "Sanctuary City" state.)

In his safe house, the aging OBL was no longer a military threat (if he ever was), but just a man in his jammies. He was a non-combatant symbolic target.

In fact, OBL was largely beyond symbolism at the point of his murder, and the action looked like a paltry act of vengeance. (However, the much-lauded operation sure provided Academy grist for a military film-makin' woman in EOE Hollywood.)

We seem to not know that vengeance is not military. It is Old Testament dogma which does not have any place in liberal humanistic thought.

This is why we will not defeat terrorism. First, it cannot be approached by classic military action. Every time a terrorist is killed, his replacement is close behind. In celebrating that which has failed, we have become emotional and betray the essential logic of war-fighting.

We choose for military myths over our legal codes and traditions.

A War on Terror will not be won by killing people in their bedrooms. If symbolic targets are not legitimate for terrorists, then how can they be legitimate for the U.S.?

Is this what warriors and war-fighting have become?

Terrorists strike soft targets, unsuspecting and in an inferior posture. When the U.S. military "takes out" soft targets like OBL -- a man well-past his "use-by" date -- it has joined in their project.

The huzzahs which followed his 2011 death were anticlimactic, the cheers sounding like a 45 record being played on 33 1/3. The "hunt" for OBL kept a war project going for a decade, but the resulting mayhem has so far surpassed the man that the outlay of accomplishing his demise has little justification.

Most cultures create a military mythos in the form of an iconography to buoy cultural spirits over an essentially death-dealing project. The new Instamatic or Super 8 is a Smartphone aided and abetted by Facebook or YouTube. It is easy, like taking holiday beach pictures -- anyone can do it.

For Hitler, Leni Reifenstahl filmed it. For Islamic State, the graphic du jour is 9th century beheadings in the desert on Instagram, victims in orange, executioner in black (orange is the new black?)

An eager, desperate, salacious and obedient press gloms on and feeds it back to us in a bright-shiny package. Just like Capt. Renault, we are all shocked.

For the U.S., it is plucky West Virginian Jessica Lynch who went down shooting (not), being sent back from the checkpoint to the hospital to allow for the filming of her heroic four-service rescue. Football hero Pat Tillman was to be interred as the casualty of enemy fire, until his family questioned the plot line.

In a time when we have lost our way, we must make meaning and justification by any means necessary.

Where are we now vis-à-vis Islamic terror?

posted by rangeragainstwar at 4:03 PM 28 comments