Not Gonna Die on That Hill 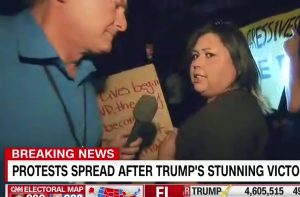 --“Lily” calls for violence and death
Yet knowing how way leads on to way,
I doubted if I should ever come back
--The Road Not Taken,
Robert Frost

Things go up, things go down,
but at least the Lord is always around
--There Will be Blood (2007)

From among the people protesting the election of Donald Trump, CNN featured “Lily”, a sign-carrying Latina woman from Los Angeles who called for blood and death. Why this would have to happen for her was unclear.

Lily appeared like your prototypical American, what Ranger calls, the “fat, dumb and happy”. She appeared to be well-fed, clean and well made-up. Like the much too many, Lily was either stupid or misled in the nature of her amorphous animation, or someone paid her and put a sign in her hand.

Like so many people, Lily is living off the fat of the land. It is not a bad life. That is why so many immigrants come to this country.

We don't say anything negative about her call for anarchy because she is a Hispanic person. We are all cowed into fearing being labeled “racist”. In fact, we consider her kind of heroic since she is featured on CNN with no censure.

Lily states enigmatically, “There will be casualties on both sides. There will be, because people have to die to make a change in this world,” she continued. “Trump, enough with your racism. Stop splitting families. Don’t split my family.”

So, there must be casualties, because Mr. Trump has been “splitting families” (even though he hasn’t held political office yet.) This seems something of a non-sequitur.

One might guess that her baffling statement has to do with illegal Mexican immigrants wanting to bring other family members to the United States. Sorry, Lily, but I don’t want to die for your right to break immigration laws.

See, these things are set in law books, and it takes legal action to get them changed. We do have limits on the numbers and qualifications of immigrants which are allowed into the United States annually. You either qualify or you do not, and it all stands on current immigration law (not Donald Trump).

If people like Lily were interested in facts, they would know that President Obama is known as the "Deporter in Chief" for the large number of illegal, mostly criminal, aliens which he has sent toting. Ah, but he is a person of color, so therefore, he too, cannot be criticized.

In fact, his decisions in this matter have been correct, and they are commensurate with those of Donald Trump. (This, according to all the major news outlets.) Yet, despite the pesky facts, Berkeley students are protesting to coerce their school president to make their campus, post-Trump, an immigrant asylum zone.

Why they have remained mum for the past eight years is a mystery.

Now, here is a thought project: what if the sign-carrier were a Cliven Bundy-type telling the government to stay off his land? That he is not going to pay the BLM grazing fees – that he would also like to break the law, like Lily -- and that he too says, “People have to die.”

Would we be kindly disposed to Cliven’s call for blood? Perhaps deify him, too, on a CNN clip?

What if it were a Branch Davidian member in WACO, Texas, calling for people to die? That would have been ironic, since they were the ones who got killed (76 of them).

They were killed in 1993 in their religious compound after a 51-day standoff with the Bureau of Alcohol, Tobacco and Firearms for suspected weapons violations. It has been postulated that the WACO deaths, in combination with those at the Ruby Ridge standoff a year earlier, were the tinder that set off the Oklahoma City (OKC) Bombing by McVeigh and Nichols exactly two years following WACO.

In 1995, OKC killed 168 people, injuring over 680. National mass killings have been with us more or less since then.

Killing is never a good way to solve a problem. It breeds more violence and killing to avenge the deaths, ad infinitum.

The nation's fear-mongering and anger escalation needs to end. The people must direct their energies to building, versus destroying.

Trump has been called upon by the press to address the rioters. But the rioters have some vague notion that they are rioting against him, so that doesn’t make much sense.

The press would be on standby, ready to call him an “interloper”, someone who does not respect democracy or President Obama, a bumpkin, tone-deaf, a jackboot or some other derisive epithets which they might conjure.

It would be like throwing butane on a fire, and Mr. Trump has rightly not made comment. What could he say after the press has had its year of evil play . . . “Don’t hate me?”

No, it must be a concerted effort, and President Obama could play a great role. By onboarding the President-elect and addressing the nation as a team, the two men could appeal to the nation’s heart and soul.

Perpetuating and fomenting protests against a legally executed election and duly-elected President shows a total lack of faith in our country. It is a sad spectacle on the part of all the players. 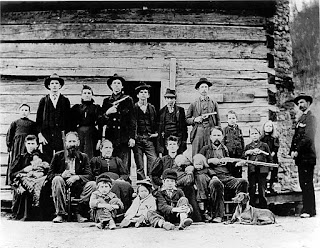 Our nation outgrew the Hatfield and McCoy grudge matches in the 19th Century. It would be a pity to resurrect them now.

And so I wake in the morning
And I step outside
And I take a deep breath and I get real high
And I scream from the top of my lungs
--What's Going On?
4 Non-Blondes

I am no prophet — and here’s no great matter;
I have seen the moment of my greatness flicker,
And I have seen the eternal Footman hold my coat, and snicker,
And in short, I was afraid.
--The Lovesong of J. Alfred Prufrock,
T. S. Eliot

After five days of violent rioting in East and West Coast cities which did not vote for Trump, the President has finally issued a tepid request for the protesters to cease their violence and to accept the election results.

Of course, the press, with egg on its face, will not go quietly. More than anything, they bear the brunt of the destruction, for when some people inclined to theater are validated by the media, they will not hesitate to give vent to their dissatisfaction in the modern flash-mob style.

The New York Times keeps grinding the organ stoking the malcontents, and CNN found an unhinged protester who actually called for blood. [At least, we would call her "unhinged" if she were a Trump supporter and had done such a thing.]

We should remind ourselves that we are a society which prides itself on the rule of law. This is a terrible way to allow a duly-elected President to enter office. It enforces division -- and much worse.

Mr. Obama's statement was even less convincing than when he first endorsed candidate Clinton -- it was faltering and non-ringing.

The calls are for Trump to quell the violence, but these are not his people. Much as when the "groping gotcha" emerged, Mrs. Clinton remains silent.

She had a potential chance for greatness then. She could have thrown up a dramatic mock-protest and asked the talking heads to stay on-topic and to not stray into personal fallibilities.

She could have spoken from the force of conviction, referencing her husband's own moral failings. She might have earned both a modicum of sympathy and admiration.

Instead, not a peep. She looked like nothing so much as a weasel peaking out of his den.

Obama has squandered the same opportunity for greatness. He could have vindicated the racial strife evidenced by repeated protests in major cities throughout his presidency by stepping up to the podium and delivering a large and impassioned speech on the necessity for a Union.

The People would have listened. It is easy to imagine they would be relieved to lay down their anger if they were told it would be the righteous thing to do. He could have turned on a bit of that Reverend Wright fire that he once (almost) displayed, and peace would have been restored

We must ask ourselves what sort of nation we wish to be. We can no longer ride on the fiction that we are the City on the Hill.

The violent protest do not make sense. We have a democracy that worked. We have selected our next President. What is the source of this destruction?

To paraphrase Golda Meir, "We will have peace when people love their children more than they hate the Other."


--A young future Ranger is in the top row

Hop in my Chrysler, it's as big as a whale
And it's about to set sail
I got me a car, it seats about twenty, so come on
And bring your jukebox money
--Love Shack,
B-52's

Standing in the sunlight laughing
Hide behind a rainbow's wall,
Slipping and a-sliding
All along the waterfall
--Brown Eyed Girl,
Van Morrison

Two lines have intersected looking through the reticle into my life.

It was called "summer camp" but we did not have a social director, unless one counts Major Michael or SFC Gene Floody as such.

The Major was a phantom-like presence, but Gene Floody was a rock in the slipstream current of Army training. He never once chicken-shitted us or harassed us beyond the prescriptions of our training. Ranger has always remembered SFC Floody fondly.

This was the beginning phase of his young adulthood and he had the world by the dick string.

Following the completion of training, the five cadets driving in his full-sized car climbed aboard at the impound lot (which is where trainees keep their cars and keys locked up so they can't fly the coop).
Ranger turned on the radio, which was not allowed in barracks. Playing was Van Morrison's "Brown-Eyed Girl".

Pete Varis said, "Hruska, that's your kind of music," and we all laughed. We had the world whipped.

We returned to finish our senior year and went on into commissioning and active service. Ranger has never seen those guys again.

Ranger heard the song on the radio the day he received the photo. Every time he hears the song he smiles and relaxes a bit, remembering how happy we all were on that bright summer day in Indiantown Gap, PA.

posted by rangeragainstwar at 9:05 PM 8 comments