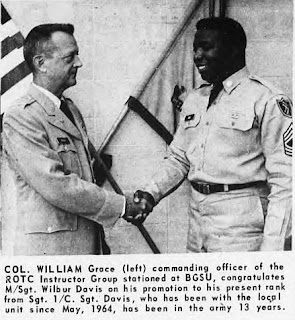 Soldier Wilbert O. Davis, Sr. (1933-2010) was a friend and mentor to Ranger while he was an ROTC student as Bowling Green State University.

Memories are are of a quiet, reflective, quick-to-smile and tough-minded NCO. Davis was a Civil War history buff, and so was Ranger.

Master Sergeant Davis was a primary instructor for Military Science I and II, and both classes were a pleasure to attend. He led us on patrols and taught us Close Quarters Combat (CQC) and rifle drill. He showed no mercy in these classes and always smiled when he put us into stress positions.

In 1966, Davis returned to the active Regular Army and pinned on his Captain's bars, going to Vietnam with the 25th Division.

The Army has an odd dual-track system whereby Davis was a Regular Army Senior NCO, but also held the Reserve rank of "Captain". The Army was in need, so Davis was called up as a Reservist.

Davis was in the last all-black Airborne unit in the Army. Since he enlisted in 1952, this was probably the 505th Airborne, which devolved from the renowned 555th Airborne Battalion (the "Triple Nickles").

[As a point of interest, the all-black 2nd Ranger Company was attached to the 187th PIR, and it is likely that Davis was in this unit. The 2nd Rangers have the distinction of being the first Ranger unit to make a combat jump (Korea).]

After retirement, Davis served as a Department of the Army civilian. He also lost his eyesight. The last time we met was in 1969 at Ft. Benning (GA), when he smiled and congratulated me on my successful completion of all the normal Benning School for Boys finishing courses.

This is an homage to one of the excellent men who helped to train up a young cadet.

posted by rangeragainstwar at 10:17 PM 5 comments 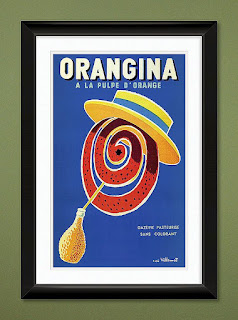 If they say,
Why, why, tell 'em that it's human nature
Why, why does he do me that way
--Human Nature,
Michael Jackson

A day after we began our Black History month here at RAW, the November 2016 shooting of the murdered black Florida cop beater 53-year-old Edward Strother was back in the news (the shooter had been cleared by prosecutors).

It is not exactly a race story, but it is, sort of.

To wit: 53 year old Edward Strother is seen in a witness's phone footage in November (2016) whaling on Deputy Dean Bardes as he sits astride the deputy in the road. Ashad Russel, 35, happens along, strapped and possessing a concealed carry permit. Bardes, in extremis, calls to Ashad, "Shoot him! Shoot him!"

[Note: several witnesses are on the sidelines, watching and filming, but not calling 911 for assistance.]

Composed, Mr. Russel warns Strother, "Stop, or I will shoot." When Strother fails to cease beating the policeman, Russel fires three shots, killing Strother. Both the assailant and his killer were black; the policeman, white.

Following firing the shots, Mr. Russel throws the gun on the ground and walks away a la the film "High Noon", when the Sheriff throws his badge in the dirt with utter disgust for his fellows and his society.

So what prompted this absurd, violent event? Some backstory:

Both the assailant and his victim shared a job history -- both had been security guards in the Northeast; Strother in Connecticut, Bardes in New Jersey. Strother worked in the field for 22 years; Bardes left after five and became a Deputy in 2005

The only personal data on Strother are reports from his neighbors that odd and loud sounds had been reported coming from his residence late at night over the last few months.

On the day of the incident, Strother was reportedly traveling over 100 mph on Interstate 75 in Estero, Florida, when he almost struck patrolman Bardes' vehicle as the deputy was assisting in a separate incident.

News reports state that Bardes felt targeted when Strother almost hit his vehicle, and he then gave chase.

Strother pulled off on an exit ramp and as the two men approached, Strother reportedly punched Bardes, who then landed on the pavement. It was then that Strother straddled the officer and began "raining down punches" on him according to a witness, also slamming the officer's head on the pavement.

So what triggered Strother? If his 22-year history as a security guard was a fairly consistent and uneventful one, what changed to make him violently target an officer of the law?

Emergent mental illness? Drug use? Personal trauma? A combination thereof? Whatever the cause, Mr. Strothers was killed in a pathetic, tawdry and sorry event.

Liberals will cry "gun control", but the man whaling on the cop did not use a gun, nor did the cop use a gun on Mr. Strothers.

Others will cry, "It is the paramilitary police", but Deputy Bardes did nothing untoward. The only way in which this is racial would be if the assailant had targeted the white policemen for his race, alone. This is unknown.

But if that is so, then what predicated this episode of racial rage?

The media was awash in news of racial violence prior to Strother's attack. The events spooling out in Ferguson, MO, was a fairly regular presence on the evening news. Then there was Freddie Gray, the youth in Cleveland, and the Charleston church shootings, among other incidents.

Also, what predicated Mr. Strother's release from his security job? Did he retire in good standing?

My construction of events is as good as any, and until further data is revealed, my diagnosis is:

Mental illness, exacerbated by an incessantly inflammatory press. Why else would a black man beating a white cop not cease his actions when a large and younger black man is standing in front of him in a full Weaver stance shouting at him to stop?

Mr. Strother must have suffered some extreme mental duress (possibly situational, possibly resulting from an organic mental illness, possibly, a combination of the two.) He may have suffered some personal affront from either a policeman or a white person.

After several years of exposure to incessant and salacious media coverage of prior racial events involving the police, Mr. Strother became vicariously, personally involved as a Person of Color (write large).

Possibly, he was on Molly or bath salts; if performed, a toxicology report was not printed. Possibly, there was no predicating event.

In what became a sad case of death-by-cop (sort of), Mr. Strothers lost his life after deciding that policeman Bardes was his enemy and beginning his brutal assault on the officer.

I contend that the two primary culprits in this pathetic and tragic event were severe mental distress or illness on Mr. Strother's part, and a complicit media organization which exploited racial events beyond their usefulness for their gratuitous ratings hunt.

Untreated mental illness and a media circus which promises fifteen minutes of fame, dead or alive. It is a toxic but heady combination in our frontier world lived on the flashy ground of social media.

Whenever acute distress meets with mediocre capabilities, tragedy is often the result. Mr. Strother was violating the law, and Deputy Bardes had demonstrated weakness with the issue of criminal containment (he had undergone remediation after a suspect once fled his patrol car.)

We can expect more Strother's and Cho's Adam Lanza's and James Holmes, until we figure out how to identify and treat vulnerable people, and how to live sanely in a world in which the itchy trigger finger is occupied scrolling through endless media feeds, and the mind attached to that finger can be roused to an immediate and visceral violence.

Moreover, the individual now lives in a vicarious relationship to those viewed events, being installed as he is in the immediate commentary (feed) to the viewed events. If you are one of the Twitterers, your shock and rush to commentary after such predictable events is disingenuous.

In this tragic event, as in most which preceded it, mental illness is the probable primary and proximal causative factor.

A fatted and goading media is the distal one. 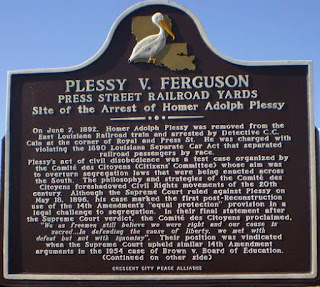 Will the suffering ever end?
--Jehovah's Witness tract left on Lisa's door


[We have been a little slaggerdly at RangerAgainstWar. We are sorry. Today -- and this week -- we present the equivalent of "Christmas in July" (the tchotchke buying spree that gets most Southern hearts a'thumpin): Black History Month in March.]

A question arises from the ground of our post-post modern angst: "Is God a bigot, or are people simply bigoted, using God as an excuse for their bigotry?" Or, is God simply not a part of the racial equation? {And, no, we may not pin this phenomenon on President Trump, as the existence of bigotry pre-dates his arrival on the planet, and will outrun it, as well.}

Further, is segregation hard-wired into Homo sapeins? If religion does not provide a way out, and one may not legislate away bigotry, perhaps it is a behavior with which we are stuck.

Further, if we ARE stuck with it, what then can be done to accommodate this reality and perhaps achieve a more felicitous co-existence in full recognition of its presence?

Would an honest recognition of bigotry's existence allow for a more honest exploration of the behavior? Perhaps, if all sides were to look at it and say, "Yes, here it is" with no hedging and no whitewash and denial. We might be better able to say what is we would like to do with and about it.

To wit: Ranger annually attends a United States Army Airborne Instructors reunion in Columbus, GA (home of Ft. Benning). This is a group of men which has shed blood together while fighting for our country and is demographically representative of our nation.

But they are not exactly a Band of Brothers.

Every year, the blacks segregate themselves at one end of the hall, the whites, at the other. (Ranger does not know who initiates the spread, and "white" could have easily preceded "black" in the previous sentence.) While these men spent their lives and careers as a group, they self-segregate. [N.B.: they all see themselves as members of the same elite veterans group, each year convening to achieve this "separate but equal" meeting.]

The Charleston church shooting of 2015 highlighted this reality. The church was not forced to be an all-black one, but it and so many others are. And the segregation occurs while the preachers in every church preach that we are all God's children.
Here in Gadsden county, it is estimated that there are 400+ churches serving a community of 49,000 residents. The majority of these churches are divided along the color line, with a smattering of miscegenation. There are the occasional annual events which bring together the various members of the religious community, but generally, the twain do not meet.

The county seat also has a segregated American Legion, with no white members. Down the road, there is Legion of predominately white members. The Legion is mentioned because of its unabashed allegiance to "God and country", "God" preceding country.

It may be 2017, and we may like to say we have made great racial strides, but that is not what it looks like to this observer.

posted by rangeragainstwar at 3:08 PM 15 comments